AfriTin on target with latest results

AfriTin Mining remains on track to reach Phase I nameplate production by the end of the year, having increase output for the third consecutive month.

In September, the company produced 39 tonnes of tin concentrate from its Uis mine in Namibia, according to a recent press release. The 28 tonnes of contained tin was a slight increase from the 26 tonnes produced in August. While there has been continuous improvement at the mine, progress has slowed compared to the rapid ramp-up seen from May to July. However, the processing plant is still expected to reach nameplate capacity of 60 tonnes of concentrate by the end of the year. 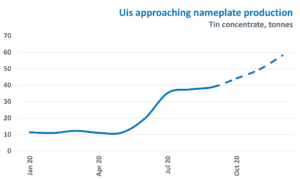 However, the company is looking even further ahead. Once steady state production is achieved at the current pilot plant, AfriTin aims to increase production capacity in three further stages. Currently, the company is progressing study work, part of which is to progress the production of a tantalum by-product. Further test work has been commissioned to determine the optimum method for liberating tantalum-bearing minerals. The final part of this work is currently underway.

Our view: Although output growth has slowed at Uis over the last few months, this has not been related to coronavirus. The mine is still on target to produce over 230 tonnes of tin-in-concentrate and to reach full production at the end of the year. Once the third stage of Phase 2 expansion has been completed and the processing plant upgraded, the Uis mine is forecast to produce some 5,000 tonnes of tin concentrate annually. At an average grade of 65% tin, which the plant is currently producing, this would be equivalent to 3,250 tonnes of metal.