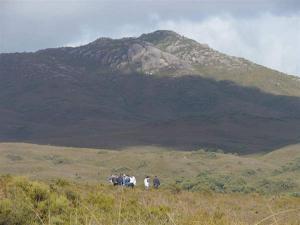 Stellar Resources has announced a maiden exploration target at the historical Razorback mine workings in Zeehan, Tasmania. The company views the project as a potential stepping stone to help advance the company’s flagship project, Heemskirk.

Razorback was worked as an open pit mine between 1975 and 1978, during which it produced 153 tonnes of tin-in-concentrate. However, Stellar estimates that between 180,000 and 220,000 tonnes of ore remain just 100 metres below the pit floor. The theoretical grade of this ore is between 0.8 – 1.0% Sn, giving around 1,400 to 2,200 tonnes of tin-in-concentrate. This estimate is based on historical drilling works, which Stellar says only extended 150 m below the historical workings. The company notes that 1979 exploration work identified possible extensions to the orebody, and that this would significantly increase the size of the exploration target. In addition to the potential mining work, Razorback also has tailings stockpiles which could be reprocessed. These tailings have a grade of around 0.25% Sn, which could be upgraded to 43% Sn through simple gravity concentration. While the company’s focus has shifted to the redevelopment of the open pit workings, tailings reprocessing remains another option for increased cash flow.

This work is being completed in order to progress the Heemskirk project, which is the company’s main focus. A recent resource upgrade indicates that around 71,000 tonnes of tin could be contained in the Heemskirk ore, significantly larger than the estimated Razorback exploration target. While a Fast Start option has been identified at Heemskirk, Stellar still requires the Razorback cash flow to begin development. However, Peter Blight, managing director at Stellar, told Stockhead that Razorback could potentially be “incorporated into the overall Heemskirk project”, negating the need for separate processing plants and reducing the required investment. The ore would be processed at a central modular processing plant, which could be expanded as the Heemskirk project grows.

Our view: Stellar aims to define an Inferred Mineral Resource at Razorback during the second half of 2019, with a view to study the potential cash flow following this. The company claims that a full Definitive Feasibility Study could be completed within 12 months, subject to funding. In May, the company aimed to complete the Heemskirk Fast Start Scoping Study in Q2 – Q3 2019, which should indicate whether the Razorback cash flow is required to initiate its larger project.