StoreDot accelerate to fast-charging eVs with silicon and tin 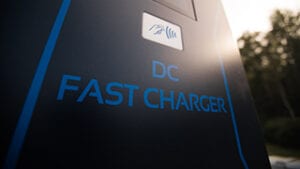 Pioneering lithium-ion battery start-up StoreDot is focusing on silicon and tin to achieve extreme fast charging. Their first five-minute batteries will be available for testing later this year, while mass production will begin in 2024.

StoreDot announced today that they will work with Chinese manufacturer EVE Energy to mass-produce their XFC FlashBattery for electric vehicles (EVs). “XFC technology is absolutely critical to accelerating the adoption of petrol- and diesel-free vehicles by eliminating the barrier of range and charging anxiety”, said EVE’s Chairman of the Board, Dr. Liu Jincheng. Daimler, BP, and Samsung are also key investors in the StoreDot technology.

A key component of the development is a new anode material that replaces graphite with new high-capacity materials. “Most of our efforts currently are focused on transitioning to silicon and tin”, said StoreDot CEO Doron Myersdorf.

StoreDot had previously sent Gen 1 samples to potential customers with germanium-based anodes but found this metal was not sufficiently abundant and not affordable. Their Gen 2, silicon-tin, fast charging cell already records an energy density of 240 Wh/kg, with a longevity of 1,000 cycles possible by the end of the year.

By 2028, this energy density could almost double with the launch of Gen 3 cells. These are designed with a hybrid form of solid-state technology and could store 440 Wh/kg. Lead-acid batteries, by comparison, hold 35-40 Wh/kg.

Traditionally, lithium-ion batteries use a graphite (carbon) anode. These are extremely stable at normal charging rates but have a high electrical resistance. During fast-charging, this causes needle-like dendrites to form on the graphite anode surface, damaging the battery.

StoreDot have replaced the solid graphite anode with tightly packed balls of silicon-tin to reduce resistance and increase conductivity. These nanoscale balls swell during charging, but there is enough room between the balls to limit swell-induced damage that has previously caused problems for non-graphite anodes.

Our view: EVs currently struggle to compete with petrol and diesel vehicles when it comes to refuelling; 3-4 miles per minute charging is the current industry standard for EVs. StoreDot hope their Gen 2 cells will provide 20 miles per minute, with Gen 3 reaching 25 miles per minute. If charging station innovation can keep up with StoreDot, their silicon-tin extreme fast charging cells could transform commercial EV charging.