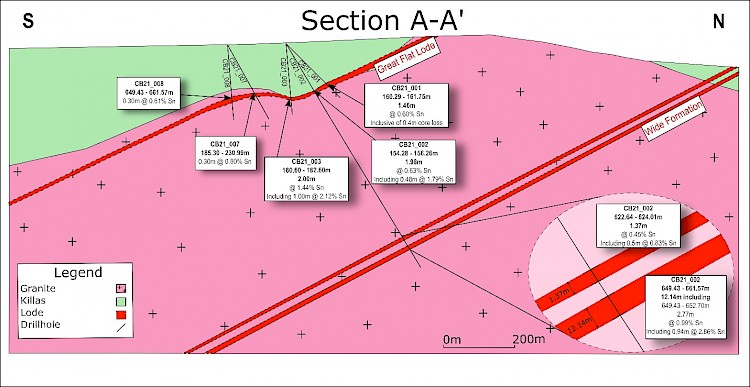 The new target, labelled the Wide Formation, is a structure that was interpreted to exist from exploration drilling in the 1960’s. However, subsequent work to confirm the structure wasn’t followed up, until now.

Drill results targeting the structure, as part of a wider drilling programme, have discovered high-grade tin mineralisation; drill hole CB21_002 recorded 2.77m at 0.99% Sn, including 0.94m at 2.86% Sn. Richard Williams, CEO of Cornish Metals stated that such a discovery in the middle of a historic mining district is a “tremendous outcome, and again demonstrates the exploration potential of the region”.

The company has been conducting metallurgical drilling at South Crofty after receiving £45 million in investment last year. The results report on eight drill holes along the southern boundary of South Crofty, targeting the aforementioned Wide Formation, and the Great Flat Lode.

Both structures lie within an area comprised of metasediments which overlie an intrusive granite body. The Wide Formation is hosted within the granite, and has not been mined historically. This is in contrast to The Great Flat Lode which was once the center of Cornwall’s historic tin production. This lies along the boundary of the two rock types, above the Wide Formation.

Drill results targeting the Lode have confirmed up-dip, near-surface extensions of the structure. The company highlighted five intercepts ranging in widths from 2.00m to 5.00m at a grade from 0.97% to 3.93%. These results make the Lode a “very compelling target to explore” according to Richard, who hopes the shallow nature of tin mineralisation represents an opportunity to define further Mineral Resources at South Crofty.

Our view: Metallurgical drilling has been a focus for the company whilst plans to dewater South Crofty continue. Identifying new targets, along with further shallow mineralisation may contribute to improving the project’s Mineral Resource. This will be welcomed by the company, with a Feasibility Study due for completion at the end of 2024.

With Cornish Metals recently leasing mineral rights containing the mentioned geological structures, they will look forward to continue exploring the extent of the formation in future drill programmes.