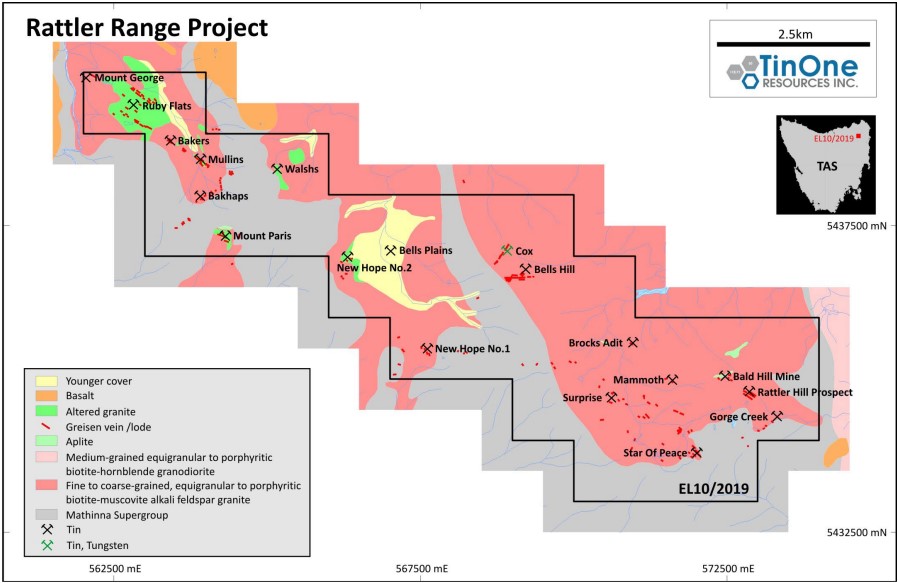 TinOne Resources has agreed to purchase the Rattler Range tin project in northeastern Tasmania, Australia, as part of its strategy to unlock value from historical tin mining districts.

TinOne Resources has been focused on developing the Aberfoyle and Great Pyramid projects – both in northeastern Tasmania. Due to COVID-related challenges, little work has been completed on the sites since were acquired from TNT mines in late 2019, although the first results from TinOne’s drilling programme at Great Pyramid were reported in late June 2022.

Despite the initial focus on Great Pyramid, Rattler Range proved to be too good of an opportunity to pass up. “We are extremely excited to add the Rattler Range tin project to the TinOne portfolio”, stated Chris Donaldson, TinOne’s Executive Chairman. “[It] underpins our key strategy of acquiring known historical tin districts and applying modern exploration techniques to unlock value”, he explained. Historical records for the Rattler Range area indicate the presence of 47 named tin occurrences, with some 19 known tin mines.

Priority targets for TinOne include Bells Hill, where multiple mineralised lodes have been mapped, although no systematic exploration has been conducted. Only two drill holes have been completed at the site. Altered granite at Ruby Flats, Walsh’s, and Mount Paris – all historic mines – is also thought to be mineralised. TinOne’s geological team will be mobilised in the coming weeks to complete initial mapping and rock sampling to define follow-up targets.

Our view: Targeting historical “brownfield” sites is a viable and low-risk exploration method, and adding Rattler Range to TinOne’s growing portfolio makes sense in this regard. We are looking forward to initial tin grade indications from the reconnaissance mapping later this year.

TinOne Resources is a member of ITA’s Explorers and Developers Group.