Alphamin Resources has announced its guidance for 2020, with tin-in-concentrate production of 9,000 – 10,000 tonnes expected. This comes on the back of positive Q4 2019 production.

The company expects tin concentrate production in Q4 to test the upper reaches of its guidance for the quarter: around 2,200 tonnes. Between October and November, the run-of-mine feed contained high arsenic contents – reportedly above smelter reject levels – but levels have recently dropped. Furthermore, 100% of production is now undergoing flotation, which has helped to lower arsenic values. Changes to the jig circuit, resulting in fewer tin fines, increased tin recoveries to ~70%. Alphamin is targeting recoveries of 72% in 2020.

Despite positive developments to production, the collapse of a key bridge in November disrupted concentrate shipments. Approvals for alternative export routes, including heavy lift helicopters and smaller ferries, have now been granted. Alphamin believes that the rate of shipping will exceed production, reducing the tin concentrate stockpile at the mine. These routes, implemented on 18 December, will reinstate the company’s revenue stream. The company are confident that these solutions will remain in place irrespective of how long the bridge repair may take. Alphamin expects to complete the bridge repair work in late January. 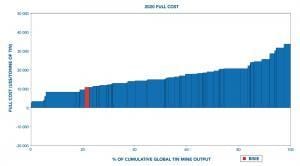 In 2020, Alphamin expects run-of-mine grades at Bisie to average 4% Sn, with plant recoveries reaching the 72% target. This should result in tin-in-concentrate production of between 9,000 and 10,000 tonnes. Concentrate sales will be some 2,000 tonnes higher as the company makes up for the recent shipping delays. Costs at the mine are expected to fall to between US$ 10,000 and US$ 12,000/tonne contained tin (AISC) from current levels of US$ 12,000 – US$ 13,000/tonne contained tin (AISC). This would keep Bisie in the lowest quartile of global tin producers’ costs on a Full Cost basis. Higher current costs are the result of the bridge repairs and alternative logistic solutions.

ITA Full Costs include the cost of mining, processing, smelting, marketing, transport and any royalties, taxes, cost of administration, exploration and development, mine closure allowance and amortisation of capital expenditure.