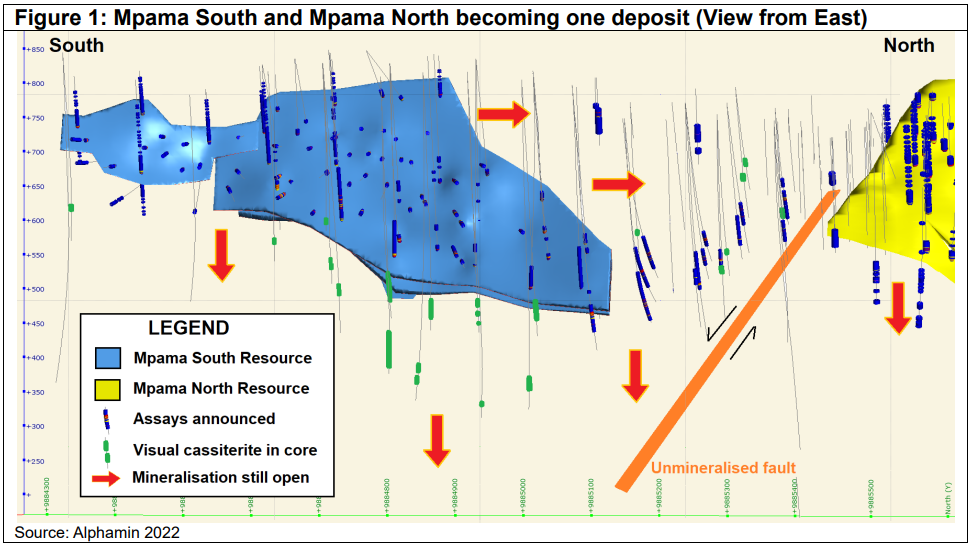 Alphamin has been mining the Mpama North deposit at its Bisie complex since late 2019. Mpama North is one of the highest grade tin mines in the world and produced some 10,969 tonnes of tin-in-concentrate in 2021. However, Mpama North was always thought to be the initial mine in a series along the Bisie Ridge; Mpama South will be the second in that series.

Mpama South has been a target for Alphamin since its inception – the company drilled 19 holes in the area in 2012 and 2013. In late 2020, Alphamin began a drilling program aimed at providing enough data to produce a maiden Mineral Resource Estimate (MRE). 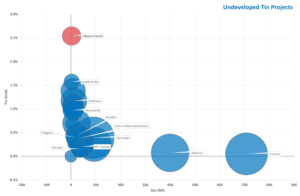 That work has now been completed, with results of the maiden MRE announced alongside the economic study results. Mpama South hosts some 70,000 tonnes of tin as Indicated and Inferred Resources at an average grade of 2.54% Sn. For undeveloped projects, Mpama South is now the 16th largest in terms of contained tin but is the highest grade.

According to Alphamin, this tin will be mined at an annual rate of 7,232 tonnes tin, giving the mine a life of around 10 years. The Preliminary Economic Assessment, completed together with the maiden MRE, indicates that this metal will be mined at a cost of US$ 15,188/tonne. The company is already well-versed in the mining and processing method as it will be a replica of the existing method at Mpama North.

Alphamin CEO Maritz Smith was delighted with the results of the studies, noting that the “Mpama North mine absorbs large fixed costs, which facilitates incremental production from Mpama South at a competitive marginal cost.”

Our view: As a company, Alphamin now holds the world’s eighth largest resource of tin between the Bisie two deposits: some 291,400 tonnes of metal. It is worth noting that the maiden MRE is only based on data until September 2021; Alphamin has drilled over 10,000 metres beyond the limits of the MRE since. Updates to the Mpama South MRE are expected throughout 2022 and beyond as drilling phases and assays are completed and received.

The CAPEX for the Mpama South project is higher than perhaps anticipated as Alphamin are planning to construct a new plant to solely processing Mpama South ore. An internal review concluded that this would be more advantageous as to not affected current mine production. Operationally, the estimated costs put Mpama South in the lower half of the global tin cost curve.