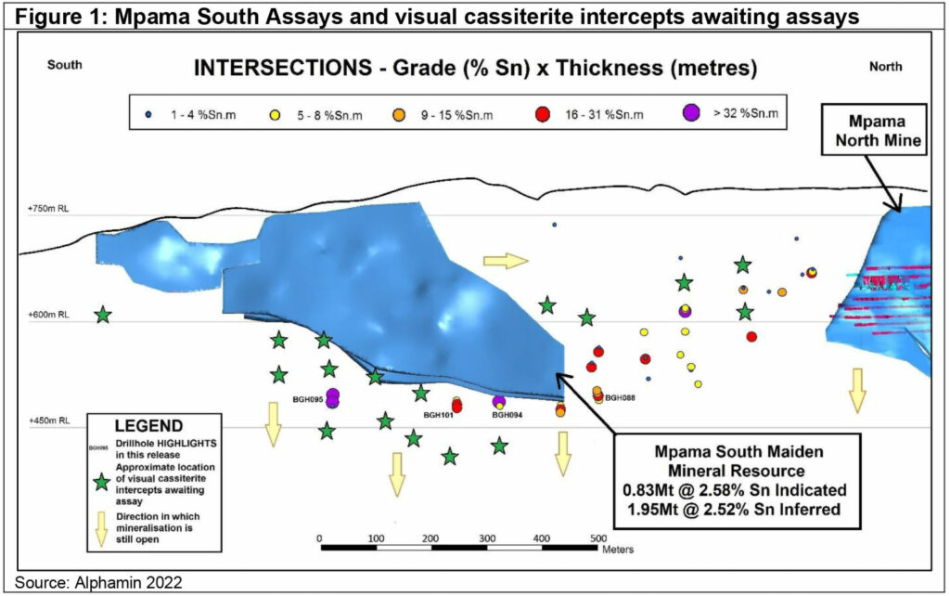 Mpama South is Alphamin‘s potential second economic deposit in the DR Congo, just a few kilometres down the road from its flagship Mpama North deposit. Mpama North is currently being mined as part of the company’s Bisie operations.

Late last month, the company released a Maiden Mineral Resource estimate for Mpama South. The deposit already contains some 70,600 tonnes of tin as Indicated and Inferred Resources, but with the latest drilling results, Alphamin plans to update this soon.

The company highlighted assay results from four particular holes: BGH095, BGH088, BGH094 and BGH101. These four holes contain intercepts with grades similar to, or above, that of the Maiden Resource. These intercepts were also of considerable apparent width, at least over 6m; BGH095 was the standout, containing 3.12% Sn across 22.7m.

These high-grade drill cores (23 in total) will be included in the next update of the Mineral Resource estimate. Alphamin expects to publish this in late March or early April, and then continually update it with further drilling results. An additional 47 drill holes have been completed outside of the Maiden Resource (including the most recent announcement), and these will be incorporated as assay results are returned.

Work is also continuing to expand the Mpama North mine, with the Deeps project, which began in July 2021. Drill hole MND019 was highlighted by Alphamin due to its extremely high grades and wide intercept: 14.4m at 21.75% Sn. Other results around this level have also returned similar grades. The company has highlighted that in order to achieve the feed grade that the processing plant is designed to deal with, it will have to blend such high-grade ore with lower grade material – but this will enable it to add production from lower grade, previously unmined blocks and could allow it to add other low-grade areas to the resource. This would help to increase mine life for the existing operation.

Our view: Results from Mpama South give confidence that the Mineral Resource can be expanded, particularly further north where assay results approach the existing Mpama North orebody. There is also reason to believe that further intercepts will be found at depth, given results from this announcement and visual cassiterite in the drill core highlighted by Alphamin.