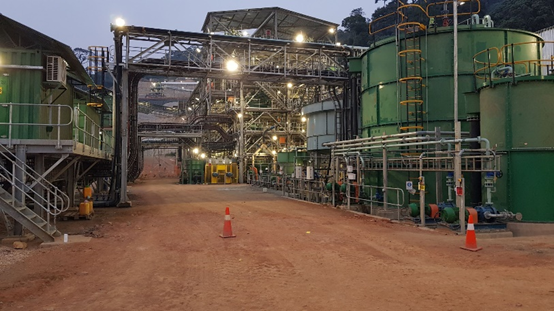 Alphamin Resources plans to further improve tin recovery at its Bisie mine, while expanding the Mineral Resource into the Mpama South ore body.

A lot of work has gone into improving the processing plant at Bisie. “When we first commissioned the gravity concentration plant at Bisie, we were focussed on ramping up to a production level of 10,000 tonnes of payable tin per annum,” explained Maritz Smith, CEO of Alphamin. Achieving that milestone took some time, with plant recovery just 56% in Q2 2019.
High arsenic concentrations also hampered improvements to tin recoveries. The presence of arsenopyrite forced a reconfiguration of the gravity processing circuit. All material now goes through the flotation circuit to reduce the impurities.
Since the implementation of these changes, the company has begun exceeding nameplate production levels. In Q2 2020, the company produced roughly 11,000 tonnes tin-in-concentrate (annualised).
However, the company believes it can increase plant throughput by another 10%. Minor plant de-bottlenecking activities could increase annual tin production to around 12,000 tonnes. Additional fine tin concentrate could also be recovered at low incremental operating costs, according to Smith.
This proposed Fine Tin Project would capture tin currently lost to tailings. The flow stream currently runs at a grade of 0.8-1.1% Sn and could produce a concentrate containing 45-55% Sn. This would be blended with the existing concentrate flows to create a final product with roughly 60% Sn. This would translate to an additional 400 – 800 tonnes of payable tin per year, further reducing costs at Bisie.
On top of improving the existing flows at Bisie, the company are also planning to expand the site’s Mineral Resource. The current Resource covers the Mpama North zone, but the company have also discovered two distinct mineralized zones at the southern prospect follwing an initial drilling campaign between 2012 and 2013.
Mpama South is just the first drilling target for Alphamin. “We have already identified a number of areas long the Bisie Ridge showing soil geochemistry anomalies similar to those found at Mpama North” says Smith, “we expect to generate a further 3-5 drill targets from these anomalies over the next 18 months”. Plans for deep level drilling at the Mpama North orebody are being developed. Here, the mineralisation is open at depth, meaning there could be even more tin contained below the Ridge.
Our view: While Alphamin have successfully begun operating the first large-scale tin mine to enter the market for some years, the company is already planning to improve Bisie. Through improving recoveries and incorporating the new Fine Tin Project, Alphamin will increase tin production without shortening the site’s initial life-of-mine (LOM). In fact, with promising initial results from Mpama South, the LOM will likely increase, guaranteeing that Alphamin will remain one the world’s lowest cost tin producers for some years to come.