Despite the large arbitrage between the Chinese domestic tin price and the LME price, imports of refined tin into China were lower than expected in October. 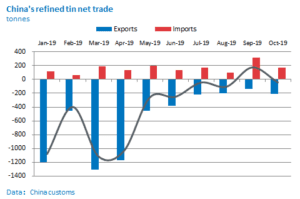 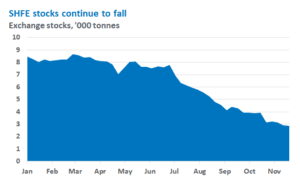 Our view: As a result of mine closures and lower imports, the Chinese concentrate market remains constrained. To relieve the pressure of the raw materials shortage, Gejiu Yunxin Non-ferrous Electrolytic Co., Ltd. announced that it will cease production for around 15 days for maintenance. However, this will only reduce refined tin production by some 200 tonnes over the short maintenance period.

More noticeable is the decline in refined tin exports and falling SHFE tin stocks. While exports were high during the first half of the year on the back of the strong LME price and constrained Indonesian supply – up some 60% on H1 2018 – they have since fallen. Q3 exports of refined tin were down some 63% year-on-year. SHFE stocks have fallen from highs of 8,660 tonnes in March to just 2,966 tonnes on 29 November, a decline of 65%.

However, the tight market and fall in exchange stocks has not seen imports increase due to the lack of profit to be made on imported tin. Demand is reportedly satisfied by the current level of production, while imports are impacted by regulations. The most common grade of tin in China is 99.95% Sn, compared to a standard LME grade of 99.85% Sn, and so the spot market price for ex-China material can be up to some 3,000 yuan/tonne lower than the SHFE active contract futures price. Furthermore, material that is directly taken out of LME warehouses – where there is currently ample material – is even less profitable. Material on the exchange does not come with a certificate of origin, which importers of refined tin into China require to avoid significant additional tax rates.