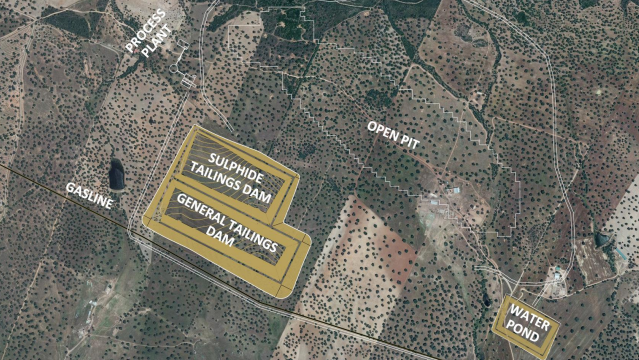 Elementos has announced progression on multiple fronts at its Oropesa project in Spain. The company has begun working on an updated environmental impact study and recently broke ground on its planned drilling work.

Oropesa‘s original environmental study (EIS) was completed by previous owner Eurotin Ltd. At the time, the plan for Oropesa was to build an initial open pit mine, before graduating to an underground operation.

However, Elementos purchased Oropesa in December 2019 and since then, the plans have changed. Elementos now envisages an open pit operation for the entirety of the project’s life.

This major change will now need to be reflected in the EIS, along with a host of other more minor alterations. As well as the major change to the mining method, the open pit mine has a smaller footprint, while the processing plant will incorporate enhanced ore processing techniques. This new addition to the processing flowsheet will extract more tin from the ore and reduce waste, reducing the environmental impact.

The EIS will be part of a package of documents that is required for the company to be granted a Unified Environmental Authorisation. This document is itself a key part of a full mining permit.

Elementos has also announced that it has started exploratory drilling at the project. The drilling campaign aims to increase the project’s overall resource, annual production rate, and mine life.

In May, the company released an Economic Study of Oropesa. This report positioned the mine as a low-cost development, producing 2,440 tonnes of tin-in-concentrate over a 14-year mine life.

However, Elementos chairman Mr Andy Greig believes Oropesa has more to give. The company is planning approximately 5,000m of drilling to optimise the mine’s JORC Resource said Mr Greig, “we’re confident that the tin resource at Oropesa could be far greater than currently known”.

The company is definitely bullish in this regard. Elementos has identified an exploration target of between 35.5 – 51.0 Mt of ore at a grade of 0.46 – 0.62% Sn. This could potentially lead to a Resource Estimate of up to some 310,000 tonnes of contained tin, a significant improvement on the current Measured and Indicated Resource of almost 51,000 metal tonnes.

Our view: The announcements by Elementos are very positive for the company, and show good progression at Oropesa. The possibility of improved resources could lead to higher production rates and and increased mine life. However, if the known deposit size increases significantly, Elementos may consider redesigning parts of the mining and processing flows to handle the increased tonnages. Despite the potential for a delay as a result, it is likely that a larger mine with a higher throughput would be even more economically viable than the plans laid out in the company’s Economic Study.