China’s import of tin concentrate continued to fall in May relative to last year as mine production in Myanmar continues to decline, while refined tin exports also fell due to a shrinking arbitrage between the Shanghai and London-based metals exchanges.

Customs data from China indicates that 14,248 tonnes of tin ore and concentrate (gross weight) were imported during May 2019, with the total tin metal content estimated at 4,100 tonnes. Although the tin metal content is up 17% month-on-month, this is still 18% lower than last year. Roughly 93% (3,800 tonnes) of the tin metal imported originated in Myanmar, up 15% MoM but down 24% YoY. So far this year, China has imported an estimated 20,200 tonnes of tin-in-concentrate, with 18,200 tonnes from Myanmar. This is down 27% and 33% YoY respectively. Due to falling concentrate supplies, refined tin production in May fell by 1.3% MoM to 13,734 tonnes, with some smelters choosing to switch to secondary feed stocks. However, reports of declining stockpiles of waste materials, combined with smelter overcapacity, means that this market is also tight.

Our view: Although ore imports increased in May relative to April, imports still fell some 550 tonnes short of last year’s monthly average, highlighting the long-term decline in imports. Due to the VAT change in April, the price coefficient for 40% Sn concentrate increased to 78% from 74% several months ago, making it more expensive for smelters to import concentrate from Myanmar. Moreover, a recent drought in the country has slowed concentrate production as many of the processing plants require water to upgrade the tin. Although the rainy season is approaching, this may actually hinder shipments due to poor infrastructure.

LME tin prices have fallen sharply since late April, which – combined with the VAT changes – has halved China’s tin export arbitrage from an average of US$ 2216/tonne in April to just US$ 1135/tonne in May. Exports have allowed Chinese smelters to continue selling refined tin in a slack market, but the closing arbitrage could result in increased stocks on the Shanghai exchange as exporting material becomes too costly. 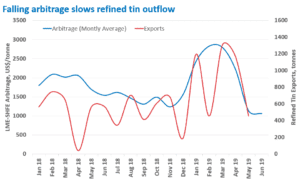