Elementos has found visible tin mineralisation in four of its exploration drill holes at its Oropesa project.

The Oropesa project, located in Spain, is Elementos‘ main exploration focus. The company began a drilling campaign in early October to improve the deposit’s resource, production rate, and life of mine.

Much of the work, according to Managing Director, Chris Dunks, is aimed at confirming the 2014 resource at Oropesa. This resource was superseded in 2017 by a smaller, but more certain estimate. Due to a lack of data, much of the original resource had to be excluded. 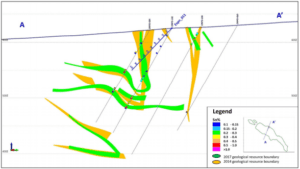 However, the recent drilling results will go a long way to improving the company’s confidence in the older data. The image (right) indicates the extent of the two different resources, as well as the recent drill holes. The mineralisation found in the new drill holes overlaps well with the 2017 resources, as expected, but mineralisation was also found in areas covered by the older estimates, adding credibility to the data.

As well as confirmatory holes, Elementos are also drilling some exploratory drill holes, in the hopes of finding mineralisation outside either previous estimate.

Our view: Most mineralisation at Oropesa is found within sandstone; drill core from hole P53, however, contained a different form of tin mineralisation.The newly discovered form of tin mineralisation at Oropesa could be good news for Elementos: it suggest that the other IP anomalies at the site are likely to be associated with tin. With roughly three IP anomalies of similar size and shape to the one underlying the known resources, this discovery increases the potential resource at the project.

Elementos still has some way to go before the completion of its drill programme. Currently just six drill holes have been completed, with mineralisation found in four of them. A total of 42 holes are planned, with a total length of 5km, giving more scope for new tin discoveries and confirmation of previous results. Drilling will continue into January 2021, according to Chris Dunks in a recent interview with Proactive. Mr Dunks also revealed that it is possible that more drilling could be in order once the understanding of the geology improves, likely into the IP anomalies.