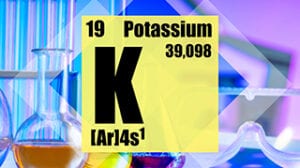 Potassium-ion batteries (KIBs) could be an attractive alternative to lithium-ion and sodium-ion batteries, but anode instability and flammability issues have so far held back progress.

In Beijing, researchers created tin-sulphur nano-scale sheets for use in KIB anodes. The material allowed fast transmission channels for potassium ions during battery charge and discharge, while volume-expansion issues were avoided.

Across the country in Xi’an, another team discovered a new method to produce tin nanoparticles a thousand times smaller than the width of a human hair. When combined with carbon in an anode, the material outperformed other, previously investigated, tin-based materials for KIBs.

A team in Taiwan investigated tin nanoparticle shape. Scientists grew tiny tin-phosphorous (SnP0.94) teardrops in the lab; usually these nanoparticles would be more spherical. In an anode, the teardrops showed superior reversible capacity and excellent structural stability. When combined with a cathode, the resulting cell had a lifetime of up to 450 cycles.

Lastly, a group in Tokyo used computer simulations to compare the performance of potassium-phosphorous anodes and potassium-tin anodes. The tin-containing option was faster at releasing energy, while the phosphorous anode was able to store more energy. The team concluded both anodes could: “perform in a range that is acceptable for use in energy storage applications”.

However, safety issues hold back KIB development. Potassium is highly reactive, with the batteries potentially experiencing so-called “thermal runaway” at lower temperatures than both sodium-ion and lithium-ion batteries. Potassium-ions are also larger than lithium and sodium. When these large, spherical ions insert themselves into tin-based anodes during charging, the anode has been seen to expand by 681%, much more than for other battery types. This expansion could cause the anode to pulverize and break down, ultimately cutting short the KIB lifetime.

Our view: KIBs have long been side-stepped in favour of lithium and sodium alternatives, despite their theoretically high energy storage potential. Adding tin to a graphite KIB anode could indeed be a significant step forward. However, KIBs have a long road to commercial viability. Vilas Pol, professor of chemical engineering at Purdue University, says: “It will take time to figure out the exact combination of electrolyte, cathode, and anode…It might take another 15 years from now to get to the market.”