ITRI reports that six of the top ten refined tin producers saw an increase in production in 2017, including three of the biggest five companies.

All Chinese companies in the top ten saw refined production rise in 2017, except for YTC where output declined marginally. Domestic mine production and concentrate imports both increased during the year, supported by higher tin prices. We anticipate that China’s primary refined tin production will remain broadly level in 2018, although secondary refined output may increase marginally.

In Indonesia, PT Timah reported a 27% increase in refined tin production to some 30,200 tonnes (unaudited) in 2017, the highest since 2011. Improved output by PT Timah and other Indonesian smelters was a result of numerous factors, primarily greater raw material availability due to higher tin prices, but also less disruption from inclement weather and government regulation than in previous years. We expect stricter government regulation of Indonesia’s tin industry and long-term production pressures, such as grade decline and resource depletion, to limit shipments this year.

Refined tin production by Minsur in Peru contracted by 8% to just over 18,000 tonnes (unaudited) in 2017 as a result of the continuing natural decline in tin grades at the company’s San Rafael Mine. We believe production from the underground mine will decline further in 2018 impacting refined tin production. In contrast, Minsur’s Brazilian subsidiary, Taboca, saw a significant 12% increase in refined production to 6,600 tonnes in 2017, helped by increased treatment of tin slags.

Europe’s major tin metal producers, Fenix and Metallo, reported total secondary refined tin production of over 13,000 tonnes in 2017, up 14% year-on-year. We believe the increase was primarily due to greater availability of tin scrap and waste due to higher tin prices. 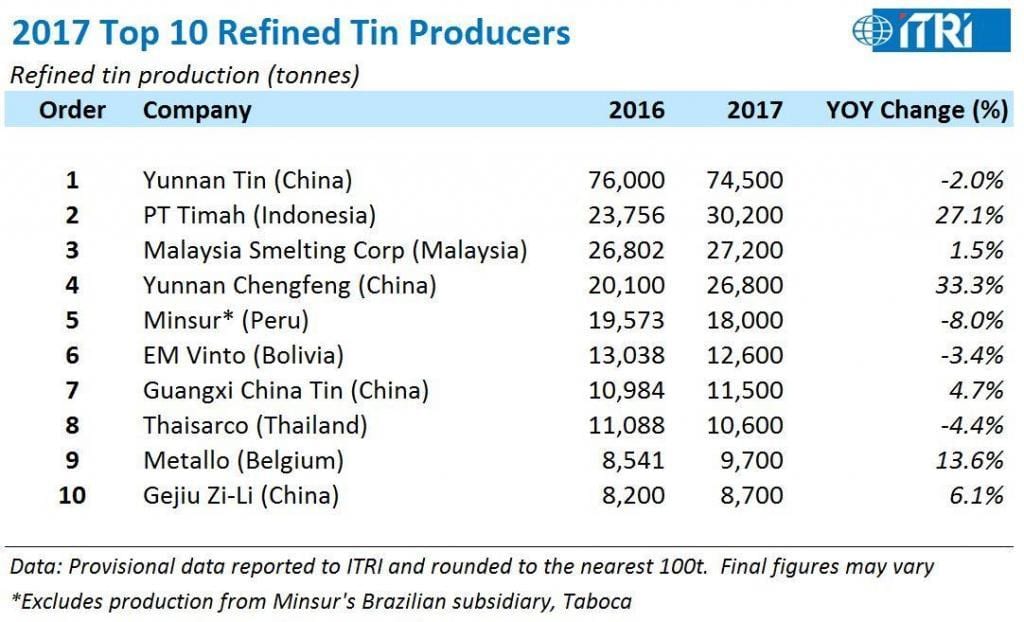