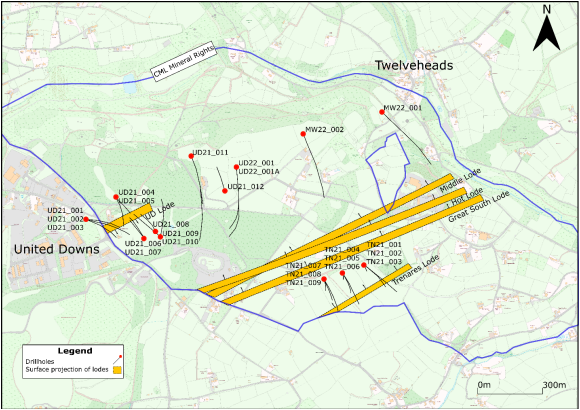 Cornish Metals has reported the final assay results from the Phase 1 drilling programme at its United Downs project.

United Downs is a collection of previously-producing mines in Cornwall, located 8km east of Cornish Metals’ flagship project, South Crofty. The latest drilling results come from the Mt Wellington and United Downs targets, which focused on areas the historic Mt Wellington and United Mines operations. Mt Wellington last operated in 1978, producing tin and zinc from the “killas”. The killas was commonly exploited for its copper-tin mineralisation, although higher grade tin mineralisation was typically found at depth. United Mines produced copper, tin, zinc, and silver until the 1870s, reaching depths of 500m below the surface.

Cornish Metals will be pleased with the latest assay results. The clear differentiation between shallow killas mineralisation and higher-grade lode structures at depth can be seen: shallow intercepts returned polymetallic mineralisation, while deeper results generally reported higher tin and copper grades. The standout tin result- some 5.07% Sn – was intercepted at nearly 650m below the surface.

According to CEO Richard Williams, “the company is now considering the next steps for United Downs”. Cornish Metals is fast-tracking the development of South Crofty, which was subject to a £40 million investment earlier this year. However, “results from the United Downs drill programme confirm the potential to develop a Mineral Resource”, Williams added.

Our view: While the entire United Downs drilling programme has returned encouraging results, it is no surprise that the company is planning to take its time to consider the next steps. The development of South Crofty into an operating mine is the priority for Cornish Metals. However, the company will likely progress the publication of a Maiden Mineral Resource alongside South Crofty.