Stellar Resources has updated the resource estimate for its flagship Heemskirk project based in Tasmania. The new report includes a maiden Indicated Resource for the Severn deposit and a 64% increase in the overall Indicated Resource, increasing the confidence in the geological model.

Currently, Heemskirk mineral resource sits at 6.6 Mt of ore at a grade of 1.1% Sn, making it the highest grade undeveloped tin resource in Australia. The total resource is split into four main deposits: Severn, Queen Hill, Montana and Oonah. The Oonah deposit was acquired in August 2018, and its maiden Inferred Resource has been integrated into the new announcement. 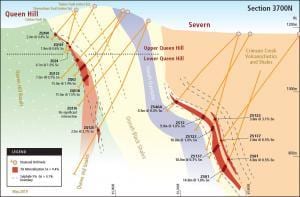 To update and improve the Resource classification in certain areas, Stellar undertook an 11-hole diamond drilling programme in 2017 in the upper Severn and Queen Hill deposits. This drilling programme reduced the drill spacing, allowing the classification to be upgraded to ‘Indicated’. This represents greater confidence in the reported mineral resource and the overall geological model. In total, Stellar has drilled 58 recent drillholes for a total of 18,709 m, with a further 133 drillholes completed before Stellar owned the Heemskirk deposits.

According to the Company, mineralisation at all of Heemskirk’s deposits remains open down dip and down plunge, representing a significant exploration upside to the Heemskirk project. Stellar Resources was amongst a group of companies that have been awarded a collective AU$ 500,000 for mineral exploration programmes by the Tasmanian Ministry of Resources, and this is likely to be used to further increase the resource at Heemskirk or for further exploration at one of the Company’s other tin exploration projects, St. Dizier or Mt. Razorback. Project consultant Laurie Veska suggested that Stellar could be looking at new finding new deposits as the grant allowed the Company to “drill deeper holes further away from known deposits, which increases the chance of perhaps making new discoveries”.

Our View: All four of the Heemskirk deposits are thought to contain areas of high-grade mineralisation. The mineralisation in these stratabound deposits, which vary in lithology, is structurally controlled by faults and fold dilation zones. Dilation zones in the Severn deposit create lenses of higher grade mineralisation within the broader sulphide halo. These deposits could be mined at a higher cut-off grade of 1.0% Sn (currently 0.6% Sn) to increase the overall resource grade to 1.5% Sn. Although this would reduced the resource tonnage to 2.74 Mt, a more selective mining method could be employed, reducing the investment required to initiate mining. This is likely to be considered in the Company’s Fast Start Option Scoping Study, which is expected to be completed in late Q2 or early Q3 this year.