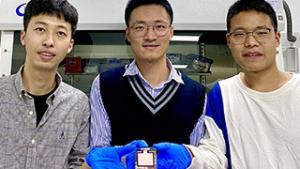 Solar is one of the fastest growing electricity sources in the world: 2019 saw solar PV energy generation increase by 22% year-on-year. New generation cheaper, more ‘earth-abundant’ technologies such as perovskite are in development but need to increase their efficiency for conversion of solar rays to electricity. New landmark research has continued to highlight tin as a key element in the race.

Theoretically, perovskite cells can convert 15% more solar energy into electricity than globally used silicon-based solar cells. Perovskite is also a cheap, widely available material, and could be produced by inexpensive printing or spraying processes. In practice, however, researchers have so far been unable to create perovskite cells that can match, let alone exceed, the 26% conversion rate of silicon-based technologies. Moreover, the most efficient perovskite cells that have been produced to date become unstable and inefficient the more they are used.

In October 2020, joint research by the University of Toledo and the National Renewable Energy Laboratory in the USA found that the efficiency and stability of formamidinium-based mixed tin-lead iodide perovskite solar cells could be greatly improved. The research used a new technique to produce these cells called ‘two-step bilayer interdiffusion growth’. The solar cells that the team produced can convert 20.4% of solar ray energy into electricity. Importantly, the cells were highly stable, being able to retain 92% of this high, initial performance after 450 hours of continuous illumination.

More recently, research led by a team at Nanjing University further improved the efficiency of two-layer ‘tandem’ perovskite cells by applying a chemical which prevents oxidation of tin ions. Experiments on these improved cells recorded a certified efficiency of 20.7%, increasing to 24.2% for 1cm2 area cells, with 88% of this performance being maintained after 500 hours of solar illumination. Experiments on smaller devices reached 25.6%, almost equalling efficiencies of silicon-based solar cells.

Our view: The solar electricity market is expanding at around 20% year-on-year to provide affordable, low-carbon electricity to countries across the world. In particular, developing communities with low electrification and sunny climates, such as much of Africa, are a potentially large solar market. If the efficiency of more affordable, tin-containing, perovskite solar cells continues to increase, perovskite solar cells could be an important contributor to an emerging portfolio of new tin energy materials.