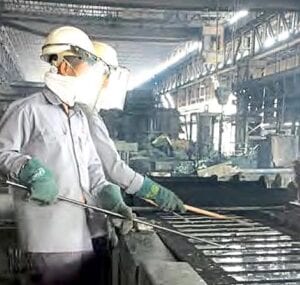 Last week, the company announced failures at two of its furnaces at Butterworth, with another being rebricked. Now, the letter to suppliers, sent on Monday 26th April, states that the company is “no longer able to handle our usual volume of feed materials”.

MSC’s Penang-based Butterworth smelter has been in operation for some 119 years but has had little investment recently due to the impending move to new facilities in Pulau Indah (Port Klang). On top of the aging facilities, the COVID pandemic has “severely affected” operations at Butterworth, according to MSC. Almost half of the smelter’s furnaces require rebricking, with the work expected to take around nine months.

“We are refurbishing the old [Butterworth] furnaces as they have been overworked, trying to catch up on lost production days due to COVID”, according to MSC’s COO Raveentiran Krishnan. However, the letter to suppliers was a precautionary measure, he said, “Most of the furnaces should be back online probably in a couple of months”.

Due to the temporary lower capacity at Butterworth, MSC will restrict concentrate deliveries “both in respect of quantity and quality” of material. To encourage this, MSC will double penalties for impurities in the concentrate.

Suppliers have also been warned that the terms of pricing are likely to change over the coming months. Concentrate sales are usually priced relative to a reference price on delivery, but MSC will now account for the “smelter’s capacity and ability to process the material”.

The company also noted that the turn-around time for foreign tolling contracts would be extended to 60 days.

Despite the current problems, MSC remains positive on the outlook for 2021. Work on the Pulau Indah smelter is continuing, with the switch to the new smelter imminent. “The [Pulau Indah] smelter should be fully functional soon and capacity problems will be over” noted Raveentiran, echoing a statement from CEO Dato’ Dr Patrick Yong last week.

Our view: In the note, MSC said that it will only return to pre-pandemic smelting levels at the end of the year. Although the company may be overstating the length of repair work, this news will be particularly worrying for the US tin market. Malaysian metal typically makes up around 15% of refined tin imports to the country, a crucial supplier in a market with no major domestic supply.

With the market already tight due to constrained supply and severe delays due to shipping issues, US consumers are already paying record premiums for physical metal. FastMarkets reports that premiums for standard grade tin reached US$ 2,000/tonne last week, but US$ 3,000/tonne premiums are already being reported in the market.

According to multiple traders, the impact of this announcement exceeds the reduction in smelting capacity. MSC typically delivers tolled metal back to clients within 30 days, but it is now extending the return of metal to 60 days, effectively doubling the shortages in the market. However, concentrate tolling is not the majority of MSC’s business.