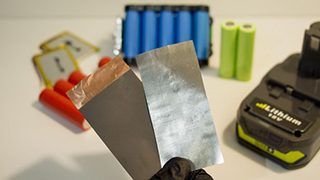 Researchers at the University of Texas at Austin, US have demonstrated that a simple manufacturing route can be used to produce a tin-aluminium alloy that may be cheaper and double the charge capacity of today’s copper-graphite anodes for lithium ion batteries.

50-70% Tin is added to aluminium blocks in the casting process, creating an alloy that can then be mechanically rolled using conventional processes to make a foil. In the process the tin particles are reduced to nanometer size, trapped inside the aluminium, stabilising them during charging cycles. The resulting material is one quarter as thick and half the weight of typical anodes.

This two-step process is much simpler than the current technology for coating copper electrodes with graphite and doesn’t involve the typical complexities and scalability issues of nanomaterial development. It is also more energy efficient because there is less dilution of the energy capacity usually resulting from the extra weight of a copper backing foil.

This new type of anode material, has been named an Interdigitated Eutectic Alloy (IdEA) anode.

“It is exciting to have developed an inexpensive, scalable process for making electrode nanomaterials,” said team leader Arumugam Manthiram, “Our results show that the material succeeds very well on the performance metrics needed to make a commercially viable advance in lithium-ion batteries.”