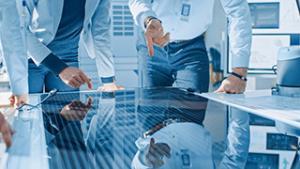 Oxford PV, a UK-based company grounded in photovoltaics, is planning to bring tin-using perovskite-based solar cells to the market by the end of next year. The company is a spin-off from research pioneered by Henry Snaith at the University of Oxford.

Snaith was part of the team that originally reported a tin halide perovskite-based solar cell in 2014. However, the original technology converted only 6% of photovoltaic energy to electrical energy, far below the 17% efficiency of the lead-based perovskite solar cells it was aiming to replace. Continued research by Oxford PV has now developed perovskite-based cells, in tandem with traditional silicon-based photovoltaic cells, to reach new efficiencies of around 27%.

Perovskite-based cells have significant advantages: they’re cheaper, more efficient and easier to produce than standard solar panels. However, there have been some questions about their long-term durability. This was highlighted in Snaith’s original paper and is due to the instability of tin in its 2+ oxidation state. But Oxford PV CEO Frank Averdung says the company has “nailed” the issue and are now looking to bring the technology to the market, according to MIT Technology Review.

The company is re-purposing a factory acquired from Bosch Solar in 2016 and is looking to produce the silicon-perovskite tandem cells in a familiar package, which can be installed in the same way as traditional solar panels. The company believes this will be a half-step which will make it easier to introduce the technology to the market. Due to its semi-transparent nature, perovskite-based PV technology can also be applied to glass, which can be installed in the place of traditional windows.

This comes alongside a similar recent announcement from researchers in Colorado, US who achieved around 25% efficiency for their stabilised tin-lead all-perovskite tandem solar cell material.

Our View: ITA has been tracking R&D developments in tin-containing perovskite solar technology for some years now and is amongst a set of next-generation renewable energy technologies that will be positive for tin demand.