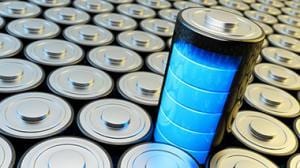 The race for better, faster lithium-ion batteries is entering a new phase as a new generation of anode electrode materials enters the market. Pure silicon or silicon-carbon anodes are already being launched as upgrades for conventional graphite products. Silicon is theoretically capable of tripling specific energy capacity and increasing overall cell capacities by up to 40%. However, tin can dramatically improve performance of silicon by speeding up lithium ions inside the electrodes.

Electrical conductivity and lithium-ion diffusion in silicon are relatively low compared to tin. It has been demonstrated that adding just 2% or even less of tin can dramatically improve energy density performance of silicon used in anode materials. Tin significantly decreases the electrical resistance of the structure, making lithiation of the silicon faster. Addition of tin increased lithiation rate of silicon nanowires by an order of magnitude, and surface diffusion by two orders of magnitude, slowing pore formation. Capacity of silicon nanowires was doubled at both high and low charging rates by simply adding small amounts of tin.

Tin itself also lithiates faster than silicon, especially at lower currents and higher voltage, leading to the design of ‘yin-yang’ silicon-tin products that can perform effectively over a wider current / voltage range.

As for tin, silicon expands and contracts by large amounts on alloying with lithium and needs to be present as amorphous stabilised nanoparticles to avoid quickly disintegrating on cycling. It has been further found that embedding silicon in a ductile metal such as tin can increase cycle life by limiting the extent of lithiation. Tin lithiates before silicon and so its expansion can in turn constrain silicon expansion. Tin metal is then a perfect active and mixed conductive matrix to host silicon, including in solid-state systems.

Tin can also speed up lithium-ions in solid electrolytes, which may become important in the next generation of solid-state lithium-ion batteries.

More details and further insights into how tin can boost performance of lithium-ion batteries is available in ITA’s comprehensive market report linked below: