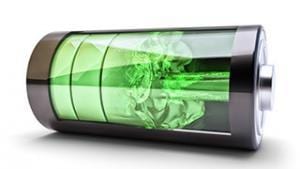 Redox flow batteries were invented over 130 years ago, with Charles Bradley patenting his zinc-bromide redox flow battery back in 1885. The long lifetime, component recyclability, and improved safety of flow batteries compared to, for example, lithium-ion batteries, makes the technology a favourable option for large scale stationary storage, despite their low energy density and high initial installation costs. The battery investigated by the Shenzhen team is a hybrid redox flow battery in which a liquid ‘electrolyte’ carries charge through the battery. Solids are deposited at one or both electrodes as the battery loses or gains charge. In conventional redox flow batteries, no solids are involved in battery charge or discharge.

In research published in 2018, the Shenzhen team reported that their tin-iron hybrid flow battery achieved 78.5-93.4% energy efficiency at current densities of 40-200 mAcm-2. It was also incredibly stable, with these efficiencies being maintained over 700 discharge cycles. The amount of energy their battery could hold only fell by 0.00096% for each discharge cycle.

The unusual structure of redox flow batteries compared to conventional batteries has meant that, until recently, these batteries have lacked a large or growing market. With the recent boom in renewable energy generation alongside governmental targets for a green recovery, there is a window of opportunity for the redox flow battery to really take off. In the next five years, some analysts forecast the flow battery market will grow CAGR 12%.

Our opinion: By 2015, there were around 78 different types of redox flow battery in development. Of these, vanadium-vanadium, zinc-hydrogen, and zinc-bromide were among the most studied options, whilst vanadium flow batteries now account for 50% of the current market. However, the high cost of vanadium is a major drawback for vanadium-vanadium battery.  This tin-iron hybrid redox flow battery prototype has encouraging performance that will need to be optimised for tin-based flow batteries to be competitive on cost, voltage, and energy density for the energy storage revolution.