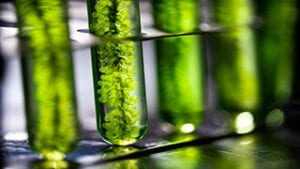 Research by a team from Firat University, Turkey has shown that tin coated copper can generate electricity from algae using a ‘multi-anode sediment microbial fuel cell’ (SMFC). The fuel cell recorded a high-power density of 2,965mW/m2 – the highest power density reported in studies of SMFC technology to date.

Fuel cells convert chemical energy into electricity through a pair of redox reactions. The cells require a continuous supply of fuel (such as hydrogen) and oxygen (from air) to allow this energy conversion. Microbial fuel cells (MFCs) follow a similar theory, but bacteria drive the reaction by transferring electrons from the cathode to the anode to maintain the electric current. In an SMFC, soil or organic rich material surrounds the anode and contains the fuel that bacteria can convert to electricity, replacing the hydrogen in the simple fuel cell. MFCs work well in mild conditions (ambient-40⁰C, pH 7), small scales and low power applications such as, for example, wireless sensors. Additionally, as any organic material can be used to feed MFCs, waste material from wastewater treatment plants could be used to power the cells.

Research from the Turkish team uses tin in the SMFC anode as a ‘Tin Coated Copper Mesh’ TCCM. The mesh is an interlock weft of tin coated copper wire with an average hole size of less than 1mm. The tin content of the mesh is 37.92%. To create the fuel cell, three TCCM sheets connected by copper wire are submerged at 2cm intervals in the mixed algae-containing anode medium. This medium was generated from the Kehli stream in Turkey, which receives discharge of treated urban wastewaters. A 2cm thick sand layer was placed above the anode medium to separate it from the cathode medium above. A platinum-coated titanium mesh formed the cathode. After ten days of operation, the SMFC voltage reached 360 mV and stabilised around this value for another fifty days. Additionally, SMFC power density (energy per unit volume) reached 2,965mW/m2, the highest power density ever achieved in SMFC studies.

These results demonstrate the power generation potential of tin containing SMFCs. Further analysis demonstrated that the TCCM was a suitable bioanode for SMFC applications. The researchers did find some issues including formation of a thin biofilm on the cathode, and formation of bubbles in the anode medium. Minor tweaks and regular cleaning could reduce these issues and maintain the electricity generating capacity of this system for a longer period.

Our view: In the near future, the global microbial fuel cell ‘MFC’ market is expected to grow rapidly. The market was worth $8.6 million in 2017 and is forecast to grow at CAGR 11.2% to 2026. However, the low power generation capacity of MFCs compared to other power sources may limit this growth. Applications with dual function, such as wastewater treatment alongside power generation, therefore, hold the greatest potential use for MFCs. The record power densities recorded in this study seem to put tin at the forefront of this exciting new field.

< Back to Fuel Cells
< Back to New Technologies