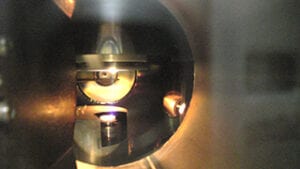 A thin, transparent, tin oxide film with record-breaking conductivity has been created for use in semiconductor applications such as next-generation LED lights, solar panels, and touch sensitive displays.

Shoichiro Nakao, a researcher at the University of Tokyo who worked on the material said: “We demonstrated the highest mobility in a thin film of tin oxide every achieved. Improved mobility not only enhances the conductivity but also the transparency of the material.”

Tin oxide films allow visible light and near infra-red light to pass through. Improved transparency would have a number of benefits, including, for example, improving the power conversion efficiency of photovoltaic solar panels.

The Tokyo team who developed the film explained their production methods were key to creating the unusual material. Nakao said: “We used a highly focused laser to evaporate pellets of pure tin dioxide and deposit or grow material exactly how we wanted it.”

The team replaced (doped) less than 1% of the tin in the evaporated tin dioxide with tantalum. The resulting tin-tantalum oxide (TTO) film was thinly deposited on a titanium dioxide surface using a laser. Including this small amount of tantalum improved the mobility of the film by 30%.

Our view: Tin-based oxide films are among the most used and studied metal oxide thin film materials for semiconductor applications due to their excellent optical and electronic properties. However, creating a thin tin oxide film with ultra-high mobility had previously eluded scientists due to difficulties growing a film with the right micro-structure. Using their new production technique, the Tokyo team have successfully advanced mobility performance. The resulting material could further boost the use of tin in the many emerging light-sensitive, semiconductor applications.