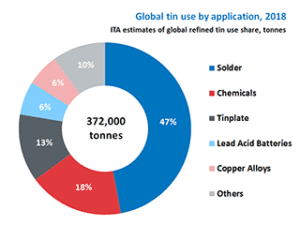 The fifteenth annual tin use survey carried out by the International Tin Association (ITA) showed refined tin use grew by 2% in 2018 but points to a contraction of -2% in 2019. 141 companies took part, accounting for some 43% of estimated global refined tin use in 2018.

Key headline findings from the report are as follows:

ITA’s latest estimate of refined tin use in 2018 is 372,000 tonnes, based on data from the new 2019 study and trade data. Refined tin demand reported by survey participants increased by 2% from 2017, roughly in line with our global estimates. However, the survey suggests tin demand will contract during 2019, primarily attributed to an unstable macroeconomic environment.

Solder accounts for by far the largest global share of tin use, growing by 2% in 2018. Forecasts for 2019, both inside and out of China, are significantly more negative because of weakening global manufacturing and supply chain issues, mainly linked with the US-China trade war. Electronics miniaturisation remains the greatest medium-term threat, primarily in China, but this will be countered by growth in new markets including 5G communications and electric vehicles.

Tin use in chemicals continued to grow, although at a slower pace. In 2018, the sector grew by 3% compared to 6% the year before, higher at 5% in China. This was mainly driven by growth in PVC stabilizer and polymer catalyst markets. Tin use for all tin chemicals, including inorganic forms, was forecasted to decline in 2019.

Tinplate use continued a long-term trend of slow decline, falling by -2% in 2018 and most probably again in 2019. Prospects are especially poor in China, despite continued reports of increasing capacity there. Lower tin coating weights and competition from alternative packaging are challenging tin use. Changing tariffs are significantly disrupting global supply chains.

Lead-acid battery tin use survey data saw the strongest growth of 4% in 2018, reflecting market expansion in high tin use start-stop hybrid vehicles, as well as motive batteries in forklifts. Continued more modest growth in refined tin use was estimated for 2019. Use in E-bikes in China is a significant proportion of tin use but expected to flatten and decline under government pressure on lead-acid batteries and competition from lithium-ion.

Tin use in copper alloys and other metal product markets declined by -2% in 2018. Copper alloy producers in China reported weakness in domestic markets for bronze strip in electrical products, with some impact from the US-China trade war on exported high-end products.

Provisional estimates of total global tin use, including refined and unrefined forms, totalled 455,600 tonnes in 2018, up 3% on 2017. The Recycling Input Rate (RIR), the use of recycled tin as a proportion of total tin use, was calculated to be roughly constant at 32% in both 2018 and 2019.

Pipeline refined tin stocks held by surveyed companies at the end of 2018 amounted to the equivalent of 3.9 weeks’ supply. If this ratio is extrapolated based on global consumption, it would imply that world consumer stock holdings were around 28,000 tonnes. The survey indicates that many users are in the process of significantly running down their inventories this year.