AfriTin Mining has announced the first large-scale blast and ore production at their rehabilitated Uis Tin mine in Namibia. This is a key milestone in the implementation of the company’s Phase 1 production plan, which envisages output of 60 tonnes per month of tin concentrate.

The first blast was witnessed by Tom Alweendo, Minister of Mines and Energy in Namibia, as well as other government officials, investors and analysts. Ore will be crushed and stockpiled ahead of completion of AfriTin‘s Phase 1 pilot processing plant, which is designed to process approximately 500,000 tonnes of ore annually. The rehabilitated Uis mine has been designed with an initial five-year production schedule under this first phase of development.

CEO Anthony Viljoen stated that the news is “a big step forward” towards bringing the mine back into production and generating revenue.

AfriTin expect that the Phase 1 plant, in conjunction with further testing, will provide a platform for completion of a bankable feasibility study for Phase 2. This could potentially comprise a 3 million tonne per annum processing facility, producing 5,500 tonnes of tin concentrate annually.

Our View: The historical Uis Mine, which was first discovered by Iscor of South Africa in 1911, closed in 1990 due to a lack of economic viability, but has since been redeveloped by AfriTin. During the period that it was open, the Uis Mine was the largest hard rock open cast tin mine in the world. While the first production of ore is a positive sign, Phase 1 is effectively a limited-output pilot operation. Successful progression to the larger Phase 2 operation will be necessary for Uis to cement its re-emergence as a significant tin production source. 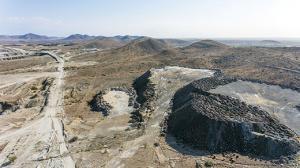