Alphamin on target despite Q3 stumble

Quarterly tin production fell at Alphamin‘s Bisie mine as the company looks to achieve its annual target of 10,000 tonnes of tin-in-concentrate.

While the coronavirus pandemic abated slightly in the third quarter, the world – and Africa particularly – continued to suffer from logistics issues. Yet, Alphamin improved tin sales during the quarter by 3%. Demand for tin concentrate during the quarter rose due to shortages in China and re-starting of smelters in the rest of the world after their closures. According to analysts at Macquarie, “Chinese concentrate enquiries are now reaching Africa and the new Alphamin mine”.

Despite greater demand, tin production at the mine fell over the same period. According to the company, this was due to lower average tin grades during the quarter; for Q3, this was 3.8%, some 12% lower than in Q2 (4.3%). 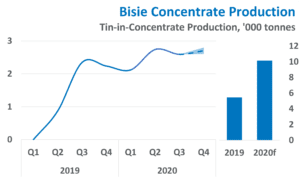 This output was at the lower end of the company’s guidance for the quarter (2,500 – 2,700 tonnes). However, Alphamin believes that production will pick up again in the fourth quarter; the company is targeting 2,600 – 2,800 tonnes of tin-in-concentrate.

Our view: Alphamin’s annual guidance for 2020 is to reach 10,000 tonnes of tin-in-concentrate. With quarterly production having averaged around 2,500 tonnes this year, it is increasing likely that the company will meet its target, even at the lower end of Q4 guidance.

However, the company will need to consistently produce an additional 500 tonnes of contained metal per quarter if it is to reach its long-term annual production goal. The 3-year objective is to reach output of 12,000 tonnes of tin-in-concentrate.

The plan to do this could be set in motion by the year’s end. The company is currently revising the Mpama North life-of-mine design and scheduling process in order to improve mine production. These will be incorporated into an updated NI 43-101 report, expected to be published by the end of the year.

On top of this, de-bottlenecking studies to improve processing throughput above the original design will be undertaken when the company begins mine studies for the Mpama South orebody. Drilling work will likely also begin in 2021. This southern orebody is thought to be on a similar scale to the northern site; if so, Alphamin could surpass their long-term goals when mining begins there.