Alphamin turns back the clock at Mpama North 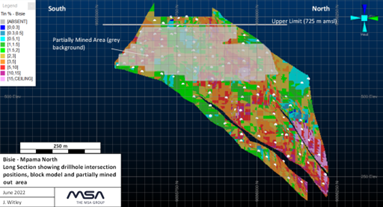 Alphamin Resources has replaced the tin depleted over the past 2 and a half years of mining at Mpama North, the company announced in a press release including an updated Mineral Resource and Reserve estimate.

When Mpama North began production in 2019, it did so with an initial lifetime of 11 years. Production over the last two years has been in line with Alphamin’s mining schedule, bringing the remaining life of the mine to just 7.6 years at the end of 2021.

However, during this time, the company has been drilling the orebody, exploring for new tin contained within. Positive, extremely high-grade results have allowed the company to publish an updated estimate of the tin at Mpama North; this new estimate has replenished the amount of tin in the mine from 154.2 kt Sn in 2019, to 154.5 kt Sn.

The replenishment of material in the Life of Mine schedule comes from two sources.

A higher price and de-bottlenecked operations have meant that lower tin grades are now economic. Alphamin has been able to decrease the previous 1.6% Sn cut-off grade to 1.0% Sn, allowing previously ignored material to be processed.

The second reason is that 20% of the material included in the mine schedule comes from Mpama North Deeps. The Deeps section of the mine was previously unexplored and only became accessible after some mining work. Results from work done in the Deeps area indicate that it is a super-high-grade chute, but more work remains to be done. Currently the Deeps area is only included in the Inferred Resources – scheduled to be mined in the final three years of Mpama North’s life – and will need further drilling to increase confidence up to a Reserve level before mining.

Our view: On-going exploration at Mpama North has cancelled out mining depletion, proving the sustainability of operations at Bisie. The updated Life of Mine Schedule now indicates that the mine can support another ~10 years of operations. Demonstrating long-term viability of a mining project is a key factor for investor and customer confidence.