According to the latest official China customs data, China imported a gross total of 15,243 tonnes of tin ore and concentrate in September 2018, of which 14,695 tonnes was imported from Myanmar with an estimated tin content of 3,700 tonnes, down by 26% both month-on-month and year-on-year.

From 1 November, China customs resumed the release of import and export data of tin-related products, which had been suspended since April this year. The previously released figure for tin concentrate imports from Myanmar in August was revised to 5,000 tonnes. Imports of tin content from Myanmar were estimated at 42,700 tons from January to September this year, down 6% from about 45,500 tonnes in the same period last year. Customs data also shows that from January to September, China imported 2,024 tonnes of refined tin ingot, mainly from Indonesia and Malaysia, while exporting 4,596 tonnes of tin ingot, mainly through Hong Kong.

Our view: The shipment of approximately 3,700 tonnes from Myanmar in September is consistent with a market survey undertaken by the International Tin Association in October. Local destocking has been supporting Myanmar shipments for the past two years. But stocks have now been greatly depleted, with preliminary data showing that local ore stocks have fallen from some 1,900,000 tonnes in early July last year to about 400,000 tonnes in late October this year. With significant consumption of raw ore stocks and declining head grades of newly mined ore, we expect average monthly tin-in-concentrate shipments from Myanmar to China to fall to the level of 3,000 – 4,000 tonnes from 2019. 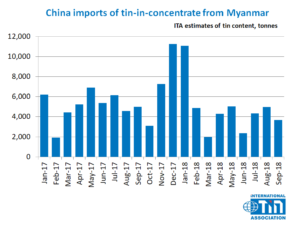