Customs data from China indicates that the country was a net exporter of refined tin again in March. Net exports were some four times higher than in February. 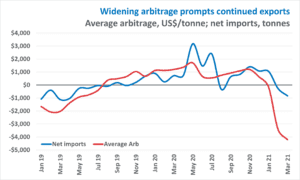 Our view: The rise in refined tin exports during March is closely linked to the export arbitrage. During the month, the arbitrage average at around US$ -4,210/tonne, strongly incentivising companies to ship metal to the international market.

This trend will only reverse if the China price can show a consistent strong performance and overtake the LME price. However, the Chinese price is already considered to be high and is reportedly suppressing demand to some degree. On top of this, Chinese authorities have announced that they will track commodities prices more closely, and are prepared to take measures to steady raw materials prices.