Usually, the country augments its significant domestic supply of metal with material from other producers. The majority of the metal typically arrives from Indonesia; in January and February, imports from the country exceeded 1,000 tonnes. Compared to the two-month January-February period in 2020, total metal imports were up some 20%.

However, China imported some 75% of the metal in January. Just 459 tonnes entered the country in February, the lowest since August 2020.

The metal trade between China and the rest of the world is dictated by the arbitrage – the difference between the LME price and the price of metal once imported into China. Over the last two years, the positive arbitrage has been strongly in the favour of imports. However, due to the tightness in the ex-China market since the start of the year, LME prices have 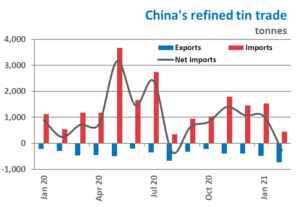 As a result, exports from China increased significantly in the first two months of 2021. Outflowing tin ingots totalled 481 tonnes in January; 731 tonnes left the country in February. The combined total (1,212 tonnes) was 133% higher than the total last year.

Our view: Although China has typically been a net importer of metal over the last two years, the arbitrage can sometimes incentivise net exports. The net export of 273 tonnes in February was the first such flow since August 2020. China has not consistently exported metal since August 2019, but if ex-China material remains in tight supply, this may become a more common occurrence.