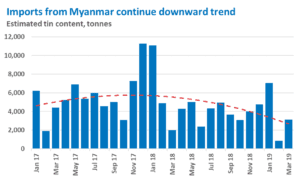 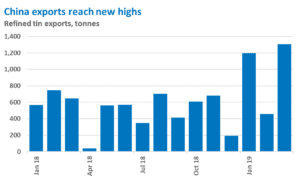 Our view: Compared to February, the tin content of shipments from Myanmar has increased extensively in March. However, this is compared particularly low baseline due to the timing of Chinese New Year this year. In the middle of April, Myanmar ore imports were temporarily suspended due to local celebrations, but now traffic has returned to normal. However, we expect that the imports in April will be lower than would normally be expected.

The sharp year-on-year decline of ore imports from Myanmar in Q1 this year reflects a long-term trend of declining tin production in Myanmar. The surge in Myanmar ore imports over the past three years relied on the consumption of local raw ore stocks, which have now been depleted.

The export of refined tin in Q1 hit an 11-year high, primarily due to the relative strength of the LME tin price compared to the SHFE, resulting in large arbitrage. Strong refined tin exports eased some of the worries regarding high domestic stocks.