The latest China Customs data indicates that the country imported 1,183 tonnes of refined tin in April. While this is level with March’s total, this is up some 773% compared to April last year. Most of this material originated from Indonesia (867 tonnes), with Malaysia (165 tonnes) and Thailand (110 tonnes) making up the difference.

Exports for the month were just 453 tonnes, down 1% MoM and 61% YoY. Net trade, therefore, was strongly biased to imports. This has been the case for much of the year, with four times as much refined tin entering the country as leaving.

On the concentrate side of the market, imports from Myanmar dropped further in April. The monthly tin content has been averaging around 4,500 tonnes so far this year, but April’s total was 2,200 tonnes, a decline of 41% MoM and 33% YoY. Total concentrate imports totalled 2,600 tonnes of tin-in-concentrate, down 35% MoM and 26% YoY. 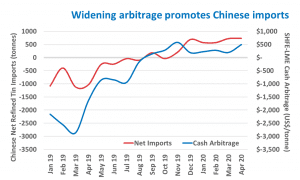 Our view: Constrained raw materials imports, as well as recovery demand, have supported the Chinese domestic price in recent weeks. This has further widened the arbitrage between the SHFE and LME, promoting refined tin imports.

The situation in Myanmar is taking longer to improve than expected. If more workers can obtain permits to cross the border, more material may enter China in June. The upcoming wet season may also relieve water shortages at processing plants.

Once processing gets back underway, we expect output to jump considerably. Mines have been stockpiling material, and now have enough ore for at least one months’ concentrate production.