Despite a shrinking arbitrage, official Customs data shows that China imported a large amount of refined tin in July – 2,750 tonnes – a six-fold increase from 2019. Imports year-to-date reached 12,113 tonnes, eleven times higher than the same period last year. As a result, the net refined tin imports from January to July this year were 9,626 tonnes, a significant change from the 4,175 tonnes of net exports in 2019. Despite rising refined tin imports, imports of concentrate have remained relatively stable. The total estimated tin content in July’s tin ore and concentrate imports was 4,200 tonnes, stable month-on-month (MoM) and year-on-year (YoY). The estimated amount from Myanmar was 3,500 tonnes, down 8% MoM and YoY. Other ore imports originated from Australia, Laos, Russia, Vietnam, and Nigeria. The imported total from these countries was 700 tonnes, up 133% MoM and 75% YoY. 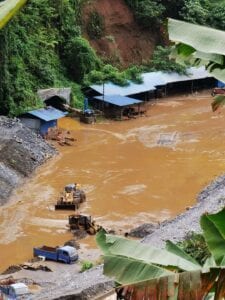 Flooded mine in Myanmar.

Our view: Demand for refined tin in China has recovered significantly from the start of 2020. The usual lull surrounding the Chinese Spring Festival was followed by factory closures and weak end-user demand due to the coronavirus. However, with the Chinese economy moving once again and promises of significant investment in network infrastructure, demand for tin has risen. Some Chinese solder producers are indicating significant year-on-year growth in recent months. Combined with smelter maintenance and tight raw materials supply, Chinese consumers have had to import tin.

Although Myanmar and China are both taking a stringent attitude to people flow across their borders, tin concentrate production in Myanmar in July and August has recovered to around 3,000 tonnes tin-in-concentrate (tic). However, we expect that tin shipments from Myanmar will drop in September because of flooding. Mines in the Wa area have been completely flooded, while a mine collapse on August 20 has exacerbated the situation. Local news estimates that mines will resume normal operations in October. Therefore, we feel that Myanmar tin shipments in September and October could decrease to 1,500 tonnes tic per month.