According to the latest customs data, China imported 13,768 tons of tin ore and concentrate (gross weight) in October 2018, of which 13,387 tons were imported from Myanmar. The tin content of shipments from Myanmar was estimated at 3,300 tons in October, down 11% from the previous month and up 6% from a year earlier.

From January to October, China imported an estimated 46,000 tons of tin from Myanmar, down 5% from about 48,600 tons a year earlier. Customs data also shows that in October this year, China imported 136 tons of tin ingots, mainly from Indonesia; Tin ingot exports were 609 tons, mainly through Hong Kong.

Our view: Shipments of tin from Myanmar in October were in line with our expectations, with the trend of declining output from Myanmar sustained. Local production remains dependent on the extraction of old mines, where the grade of tin has reduced to 1-2%. Deeper mineralisation is still promising but difficult to exploit because of the high temperatures and hot water. Large stockpiles of ore built up in recent years and used to bolster concentrate production are projected to be depleted by the end of the year. We expect monthly shipments to be about 4,000 tons in November and December, and therefore that shipments will be around 18% lower than last year. 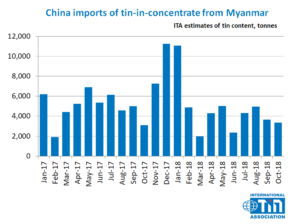