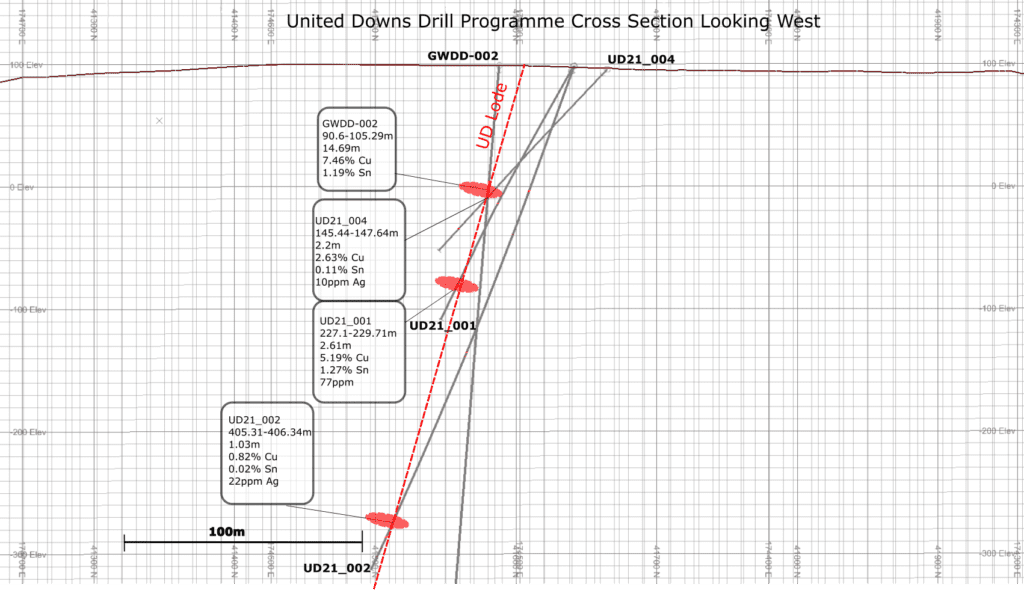 Cornish Metals has announced assay results from the majority of the drill holes at its United Downs project.

The United Downs project is located in the historical tin-producing region of Cornwall in the UK. Also nearby is Cornish Metal’s other tin project, South Crofty. United Downs operated as a copper mine in the 17th and 18th century. Other mines within the United Downs mineral rights, including Mt Wellington and the Consolidated Mines, produced high-grade copper ores during their lifetime.

Initial drilling results from the “UD Lode” in April 2020 proved the existence of a high-grade copper-tin structure. Results from the most recent round of drilling confirm that the mineralisation extends laterally, but further interpretation of the geology has revealed that the UD Lode does not follow typical structures in the area. Rather than the typical near-vertical, more northerly dipping structures common in the area, the UD Lode instead dips steeply towards the south. Copper grades in the drilling results so far reflect historical mine production from United Mines, just 200m south of the UD Lode.

To date, Cornish Metals has reported some 3,042m of total drilling. A further 5,000 – 6,000m are planned as part of work to produce a Maiden Mineral Resource for United Downs. The company aims to produce the Resource Estimate within 18 months of Cornish Metals’ listing on the AIM exchange. The company had its Initial Public Offering in February 2021.

Our view: With the exception of a very high-grade tin intercept near surface in drill hole UD21_001, many of the tin results from the release were below 0.3% Sn. The global average tin grade sits around 0.8% Sn. However, tin in Cornwall is typically found at depth, often beneath copper or polymetallic mineralisation.

At South Crofty – Cornish Metals’ other project – the polymetallic zone (known as the “killas”) passes into tin-rich mineralisation at depth as the mine encounters the source granite. Only the upper “killas” zone has been exploited at United Downs to date; the granite was intercepted by drill hole GWDD-002 at 300-600m and 700m below surface. Only one drill hole – UD21_002 – intercepted these depths from the most recent drilling program, but did not pass into the granite. Further drilling at depth could return higher-grade tin results.