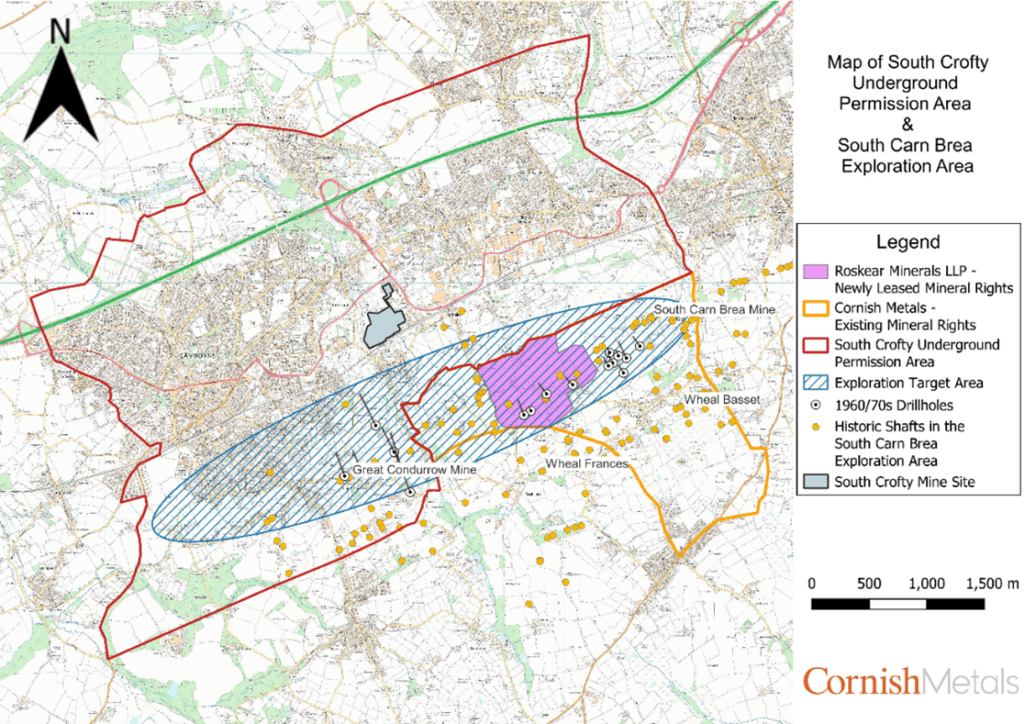 The South Crofty mine has been closed since the late 1990s, but Cornish Metals has been working to bring the mine back into production since 2016 when it acquired the rights. The company was recently subject to a £40 million investment to progress work at the mine. Cornish Metals plans to dewater the existing mine infrastructure before publishing a Feasibility Study for the project.

The Feasibility Study will focus on the South Crofty Underground Permission Area (SCUPA) – where Cornish Metals would be allowed to mine – but there is significant potential outside of this. Historical mining took place in the South Carn Brea Exploration area, just to the south of the SCUPA. Cornish Metals will look to investigate the Great Flat Lode, a formation of high-grade tin mineralization as well as the Wide Formation, a tin-bearing structure believed to lie beneath and to the north of the Great Flat Load.

Cornish Metals already had the mineral rights for much of this area. However, certain regions are owned by Roskear Minerals LLP. In the recent announcement, Cornish Metals agreed to lease this area from Roskear, enabling new exploration and potential mining in the area.

The Prospective Lease on the 49-hectare area is for five years, with the option to extend for a further five years if required. If successful targets are found, this can be converted to a Mining Lease at any time during the lease period. An annual rent will be paid to Roskear for the Prospective Lease, with a tin price-based sliding net smelter return royalty on any mineral production under the potential Mining Lease.

Our view: The dewatering of the existing infrastructure at South Crofty is expected to take 18 months in total. The process will be completed in two stages, allowing Cornish Metals to begin drilling in the mine as access to the lower levels in regained. However, during the first stage, there is little Cornish Metals can do in the SCUPA. Therefore, the company is working to expand the resource potential in the area, with work being completed at United Downs and more locally around South Crofty.