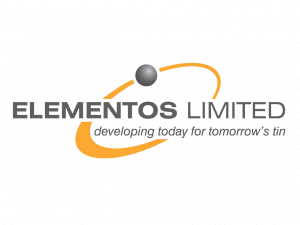 Approximate location of the Oropesa tin project, owned by Elementos

Elementos is an Australian, ASX-listed metals company with a portfolio of tin projects including Oropesa in Spain, Cleveland in Tasmania and Temengor in Malaysia. The company is actively developing each of these projects with Oropesa the priority following its acquisition in 2018. The company believes that having a diversified tin portfolio in jurisdictions with a long mining history is a lower risk growth strategy.

The Oropesa tin deposit is located in north-west Andalusia, 180km northeast of Seville in southern Spain. Oropesa is a hard-rock tin deposit amenable to open-pit extraction methods, with the potential for further development as an underground mining operation. Elementos acquired the project in November 2018. A feasibility study for the project is due to be completed in mid-2019 with environmental studies complete and a mining license application already lodged.

Cleveland was an underground tin and copper mine near Luna, in Tasmania, operated by Aberfoyle between 1968 and 1986 which produced some 24,000 tonnes of tin. Elementos plans to redevelop the project in three stages, beginning with reprocessing of tailings followed by the open pit resource and subsequently the underground resources of tin, copper and tungsten. A PFS was completed in August 2015 for the tailings operation as well as a maiden ore reserve estimate. In September 2018, the JORC-Compliant resource was updated following a successful drilling programme.

The Temengor project was a hydraulic elluvial tin mine that operated from 1926 to 1932 and has undeveloped hard rock tin potential over an area of 1 km2. Elementos are negotiating a Farm-in and Joint Venture agreement for the project.

*Tailings to be the initial focus of staged development