The Granville tin mine, which was acquired by Aus Tin Mining in 2015 and expanded to include the Granville East prospect in late 2018, is set to be placed on temporary care and maintenance due to issues relating to the mine fleet.

Granville, located in Tasmania, has been operating since mid-2016, when it was restricted to processing just 2,500 tonnes of ore per year. Following several years of work by Aus Tin Mining – including the installation of a new tailings pit – the license was expanded to 40,000 tpa ore and the company moved to expand the mining operations to the Granville East project. However, Aus Tin have been plagued with issues since expanding the mine.

Rather than delay the mining operations and look for another contractor, Aus Tin Mining decided to transition to owner mining. However, due to the requirements of an ore stockpile before processing, Aus Tin decided to look for another contractor to do the crushing work. Despite positive crushing trials in May 2019, Aus Tin decided not to go with the contractor as they could not secure their services within the timeframe required by the operations. Instead, Aus Tin purchased its own crushing plant: a second-hand mobile crushing plant that was refurbished dune July and August.

While this looked to be the end of the company’s issues, with production of tin concentrate improving drastically after the arrival of the mobile crushing plant, operations were once again disrupted in September after both the mine truck and excavator failed – the company were advised that the latter could take up to six weeks to repair. Although a smaller excavator was hired during the interim, the company decided to undertake a strategic review of the operations.

Aus Tin has now announced the results of the strategic review: the company plans to place the operation in temporary care and maintenance until the mine fleet is available once again. However, the company also identified several key areas for improvement after it was found that several Key Performance Indicators (KPIs) were not being achieved. This includes the mined and mill feed grades, as well as the tin recovery to pre-concentrate.

Tin recovery was highlighted as having the most significant impact of production. To improve this, Aus Tin is aiming to install additional equipment within the existing gravity processing circuit, as well as incorporation additional floatation capacity into the dressing circuit. Both, according to the company, should increase tin recoveries.

On top of this short-term upside, the potential for additional pre-concentration before milling was raised. The company previously employed a jig to increase the feed grade of tailings material entering the mill (from 0.9% Sn to 2.3% Sn), and the company are considering installing another jig for run-of-mine material. Magnetic separation and ore-sorting could also be employed, and their benefits will be evaluated. 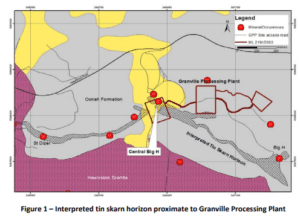 In the long-term, Aus Tin Mining is also working to expand its mineral inventory, with the Central Big H skarn horizon – located within 500m of the existing plant – identified as a future target. The company are reportedly the preferred applicant for the exploration license covering this horizon as well as several magnetic targets between the processing plant and the current mine.

Aus Tin has indicated that the resumption of operations, possible expansion and further exploration is dependent on securing the appropriate funding, which the company is pursuing. The estimated cost is thought to be around AU$ 500,000, including the installation of the additional processing equipment. The largest cost will be the repairs to the 50-tonne excavator, which could take up to two months. Alternative arrangements are being pursued.

Our view: Several mining companies have already installed ore-sorting technologies to good effect, including Minsur S.A. at its San Rafael mine and Bluestones Mines at Renison, also in Tasmania. This is likely to offer considerable upside to the grade of the run-of-mill material, possibly above that previously achieved by the jig.

Furthermore, the Central Big H prospect is of some interest. The skarn geology is similar to that already being exploited at Granville and so could represent similar high-grade mineralisation. Assay results at Granville indicate >1% Sn, up to 4.9% Sn; the first ore blocked mined at the site was 2.1% Sn. With the prospect being located so close to the existing processing plant, this represents a relatively low-cost expansion target in the medium- to long-term future.