Further to its announcement in July, Kasbah Resources released the results of its exploratory drilling programme. The programme aimed to test the continuity of mineralisation along the Sidi Addi Trend, a previously untested zone of mineralisation parallel to the main mineralised area at the company’s Achmmach project, Morocco. 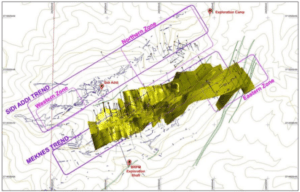 Most of the Mineral Resource at Achmmach sits within the Meknes Trend. The sub-parallel Sidi Addi Trend has the potential to host a similar resource.

Currently, the majority of the tin mineralisation at the Achmmach project is confined to the Meknes Trend, a geological structure that runs roughly north-east. From a database of around 325 diamond drill holes into the Meknes Trend, Kasbah have reported a total ore resource of 14.6 million tonnes. However, a similar, sub-parallel structure – the Sidi Addi Trend- was also identified through exploratory drilling. Previously, only a small sub-section of the potential trend had been drilled, yet this “Western Zone” of mineralisation already host an additional 340,000 tonnes of ore.

Due to the similarity between the structure, Kasbah – through its joint venture with Toyota Tsusho Corporation and Nittetsu Mining, Atlas Tin – identified the ‘Northern Zone’ of the Sidi Addi Trendas a key exploration target. As announced in July, Atlas Tin completed an exploratory 10-hole diamond drilling programme to establish the continuity of tin mineralisation. The drilling programme identified tin mineralisation in all 10 drill holes, with mineable widths and grades intersected. According to Kasbah‘s CEO, Mr Evan Spencer, the intercepts “exceeded initial expectations”.

While the continuity of tin mineralisation from the ‘Western Zone’ to the ‘Northern Zone’ of the Sidi Addi Trend has been established, Kasbah intends to complete additional drilling work to define a mineral resource. However, the company is not rushing into another drill programme, and is instead working on the interpretation of the already-identified mineralisation to plan a more targeted phase of diamond drilling in the future. By combining the new drill results with the established geological model for the Meknes Trend, Kasbah has been able to increase its confidence in the current geological interpretation, which can then be applied to guide the next drilling phase.

Our view: The Sidi Addi Trend represents enormous potential at the Achmmach project. While the new mineralised zone is unlikely to be geological identical to the well-defined Meknes Trend, the Sidi Addi Trend represents a significant potential upside to the existing Mineral Resource. Furthermore, as the mineralised structures remain open at depth and along strike, there is even more exploration upside at Achmmach. After having moved away from a Small-Start Option (SSO) at Achmmach, the definition of a larger mineral resource fits the mining risk management strategy planned in Kasbah’s July 2018 Definitive Feasibility Study.