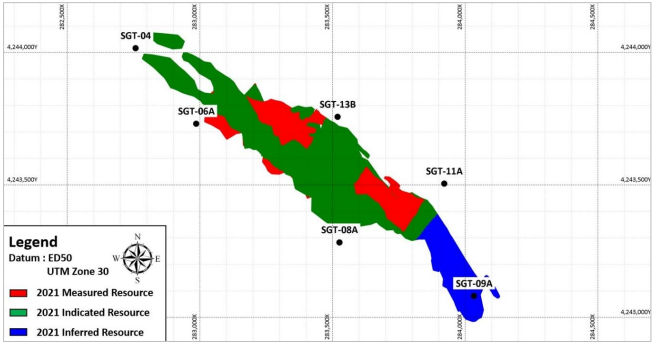 Elementos has encountered further mineralisation, outside of the Mineral Resource at its Oropesa project, during geotechnical drilling.

Elementos has recently been drilling around the defined Mineral Resource at its Oropesa project in Spain. Rather than just extracting drill core, the company has been gathering geotechnical data from drill holes as well. This will be used to aid the mine design and add confidence to mine slope angle calculations in the company’s Definitive Feasibility Study.

However, despite not being in an area with known tin mineralisation, these drill holes returned good grades. Intersections highlighted by Elementos in the latest release averaged 0.27% Sn, only slightly lower than the Mineral Resource grade of 0.4% Sn.

On top of the tin, these drill holes were also assayed for copper and zinc, with strong grades returned. Joe David, Elementos CEO, indicated that there is potential for the company to recover the two base metals as a separate product. Copper and zinc-containing material would be separated early from the tin ore, with the two streams processed in parallel. This would require no change to the planned tin processing circuit. Elementos now plans to model copper and zinc throughout the existing deposit to determine whether further test work is worthwhile.

Elementos is currently working on an Optimisation Study for Oropesa to determine the scale of the final mine, which will feed into the Definitive Feasibility Study. The company aims to publish the Study by the end of March. Applications for an Environmental Impact Assessment and Mining License are underway.

Our view: Elementos appears to be fast approaching an investment decision for Oropesa. With the latest results, the company has highlighted the potential of further mineralisation outside the current scope of the mine. This could be used to extend the life of mine beyond the preliminary 14 years or to increase the size of the project if it can be proven to be economic.

Elementos is a member of ITA’s Explorers and Developers Group.