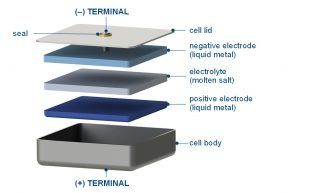 A team at University of Kentucky have patented a liquid metal battery using tin and bismuth electrodes, with molten zinc chloride, for grid-scale energy storage.

The Liquid Metal Battery (LMB) concept is decades old but has been first re-invented in modern times by Massachusetts Institute of Technology, who are now commercialising products through their startup Ambri. In this new variant, patented by the University of Kentucky, tin and bismuth are combined with a molten zinc salt, to make a much safer system than previous technologies based on sodium, magnesium or lithium, and the ability to operate at the much lower temperature of 300⁰C.

LMB batteries will support small-scale power grids linked to wind and solar power particularly. They are made relatively simply from commodity metals and so don’t rely on economies of scale to reduce costs. Importantly they are not subject to the same issues of degradation and dendrite formation that limit the life of traditional batteries, giving them potential for unprecedented operational life, possible of up to 20 years. They may outperform  conventional technologies including lithium-ion and flow cell because of their unique design, fast charging, high rate capability, long life and manufacturing scalability.