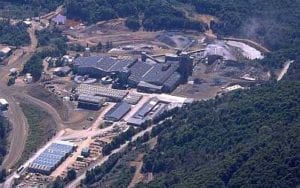 Tasmanian tin miner Metals X expects tin production for the first half of 2020 to be lower than previously expected. The company now sees production of tin-in-concentrate some 1,000 tonnes lower than previous guidance.
The company has been working on the Area 5 project during 2019, an area of high-grade mineralisation within the Renison mine. Area 5 has a grade of 1.91% Sn, higher than the overall grade of 1.50%. As the project has progressed, however, updated designs and sequencing considerations have delayed stoping. Ore from the Lower Federal area (the main section of the mine) has also been lower grade than expected. The company changed the mining sequence and increased the number of pillar due to geotechnical considerations.
As a result of these changes to the mine plan, the company estimates production of some 7,000 – 7,400 tonnes of tin-in-concentrate in financial year 2019/20. Previous guidance was 8,000 – 8,500 tonnes. At the same time, the all-in-sustaining cost of the mine is likely to increase. The company has downgraded guidance for the 2019/20 financial year to AU$ 18,200 – 19,100/tonne from AU$ 17,000 – 17,500/tonne.
However, the company did announce some positive results. The Area 5 Optimisation Study is progressing well, with completion planned for the end of Q1 2020. This information will go into the life of mine schedule, providing production guidance from Q2 2020. Also, the Metallurgical Improvement Program has seen tangible results. Metallurgical recovery has improved in line with planned models; since 2011, tin recoveries at an ore grade of 1.50% have increased from ~63% to ~73%. Metals X will also commission an ‘On Steam Analyzer’ in Q3 2020, which will “provide greater operational control across the process circuit, reduce variability and support further improvements in recovery.”
Finally, Metals X agreed an option for the closure of the Mt Bischoff mine. The plan will be further developed into a formal proposal and lodged for approval in mid-2020. Total costs during the first six years of closure are estimated at around AU$ 16.3M. The company took over the mine in 2008 along with Renison Bell. Between 2009 and 2011, the mine produced some 5,000 tonnes of tin-in-concentrate until it entered care and maintenance in 2011.