China’s imports of tin ores and concentrates totalled 30,719 tonnes in January, with 29,389 tonnes from Myanmar, according to the latest official customs statistics. The estimated tin content of shipments from Myanmar in January was 7,100 tonnes, up 48% month-on-month, but down 36% year-on-year.

Our View: January tin shipments from Myanmar increased substantially from December, driven by stock clearances due to pressure to pay workers’ salaries and fulfil debt obligations before the Chinese New Year (CNY) holiday. Even so, tin shipments from Myanmar in the two months before the 2019 CNY holiday (December 2018 and January 2019) totalled 11,900 tonnes, down by 10,500 tonnes from the same period before the 2018 CNY holiday. February shipments are expected to remain at a very low level as local mining activities are yet to recover completely since the holiday. We expect mining to resume normal levels around March. Strong refined tin exports in January are attributed to the robust LME price compared to the Chinese domestic price. 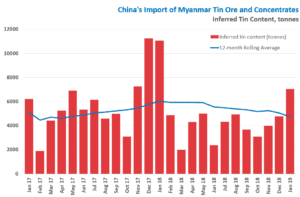