Metals X, which owns a 50% stake in the Renison tin mine, Tasmania, through the Bluestone Mines Tasmania Joint Venture, saw revenue fall from $42.5 million to $36.5 million in the final quarter of 2018.

During Q4 of 2018, the operational focus at the Renison mine was on the commissioning and operation of the new ore sorting plant, along with continued exploration in Area 5 and the Leatherwood Trend, both of which are upcoming production zones. Commissioning of the three-stage optical ore sorting equipment began in the second quarter of last year and was completed in Q3. The equipment is comprised of a crushing, screening and ore-sorting stage, which concentrates the ore, increasing the head grade of the feed to the main ore processing plant. This was estimated to potentially increase production of tin-in-concentrate by some 15 – 20%.

Along with its mine works at Renison, Metals X has also been exploring the reprocessing of its tailings, known as the Rentails project. Although it had hoped to gain environmental approval for the project during the last year, Metals X will seek to lodge a Development Proposal and Environmental Management Plan (DPEMP) with the Tasmanian government during 2019. Key Rentails activities during the last quarter of 2018 were the continuation of environmental approvals and mining studies, as well as the associated geochemical tests. This information will be used to design the deconstruction and reconstruction of the tailings dam.

Our View: The decreased revenue from Renison compared to the same period the previous year is thought to be due to lower production, associated with the commissioning of the new ore sorting plant. However, production during the first quarter of 2019 appears promising, with the company reporting a record month for production during January, despite having to temporarily halt operations during the month due to bush fires. 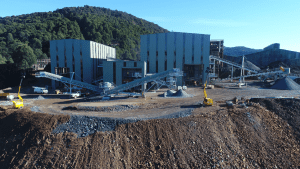