Refined tin production by Minsur’s Peruvian operations contracted by 8% to some 18,033 tonnes in 2017, in line with production guidance, as a result of the continuing natural decline in tin grades at the company’s San Rafael Mine.

Annual mined tin production from San Rafael fell 5% to 17,791 tonnes. The volume of ore treated rose 5% year-on-year but was offset by a decline in head-grades to 1.75% Sn, reflecting the processing of low-grade ore stocks through the mine’s optical ore sorting plant. The annual cash cost of production rose 8% to US$8,827 per tonne of tin produced.
Looking to the future, an ongoing drilling campaign to replenish resources at San Rafael identified 1,539 kt of ore containing 28.1 kt of tin in 2017. Meanwhile, Capital expenditure in Peru included US$21.4 million on the B2 tailings project, which has moved into the execution phase, along with US$32.8 million on other projects at San Rafael, including construction of the B3 tailings site.

Our view: San Rafael’s optical ore sorting plant is expected to be back in operation by around March, with the treatment of existing low-grade ore stockpiles likely to continue until the end of 2018, not the end of 2017 as previously anticipated. We believe tin production from the underground mine will decline further due to lower ore grades, impacting overall mine production in 2018 and beyond, although production from the B2 tailings project should help compensate for this from 2019 onwards. We provisionally anticipate that refined tin production will fall accordingly to between 16,500 and 17,500 tonnes this year, although we expect Minsur to provide official production guidance when it’s consolidated results are released at the beginning of March. 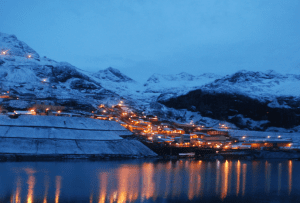 San Rafael mine at night