Indonesian state-owned tin producer PT TIMAH has reaffirmed its plan to reduce refined tin exports by 2,000 tonnes per month after having announced the plan in September in response to low tin prices. Speaking to Indonesian news agency ANTARA on Friday 4 October, Company Director, Mochtar Riza Pahlevi, confirmed that the company had “reduced overseas sales as a response to the decline of tin prices”. According to Mr Pahlevi, exports had already been reduced by between 1,000 and 1,500 tonnes since July 2019, but these cuts would increase by another 1,000 tonnes per month. As of 4 October, the LME 3-month tin settlement price sits around US$ 16,400/tonne, lows not seen since mid-2016 as the price was recovering from the 2015 bear market.

The attempts to reduce production and bolster the price were praised by the Association of Tin Exporters (AETI), who called for Indonesian tin companies to reduce their production in another interview with ANTARA. The AETI’s Secretary General, Jabin Sufianto, said that Indonesia had “a critical role in fixing the commodity’s low price”. Indonesia is the world’s largest exporter of refined tin and supplies much of the market outside of China. As such, it does play a pivotal role in the tin market, although previous attempts have centred around reducing exports from the country, and have been foiled by attempts to front-load exports and stock material during these periods. However, due to the dominance of PT Timah in the Indonesia market, it is much more likely that the cuts that have been called for will be put into practice.

While the cuts to refined tin production have reportedly been on-going since July, they have not yet made an impact on sales through either of the two Indonesian metals exchanges, the ICDX and JFX. Data from the two indicate that sales of refined tin increased by around 1,000 month-on-month since July, when sales had fallen to just 4,285 tonnes due to delays associated with export license renewals. However, sources close to TIMAH have indicated that the reduced production should begin to affect tin sales starting from October. 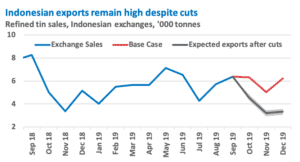 Our view: Current reported stocks of refined tin metal held by Indonesian producers total some 8,300 tonnes, and will need to be reduced before the market is impacted by the reduction in refined tin production. That being said, should exports fall to around 4,000 tonnes per month, this would put the market in a significant deficit during Q4, assuming demand forecasts hold true.