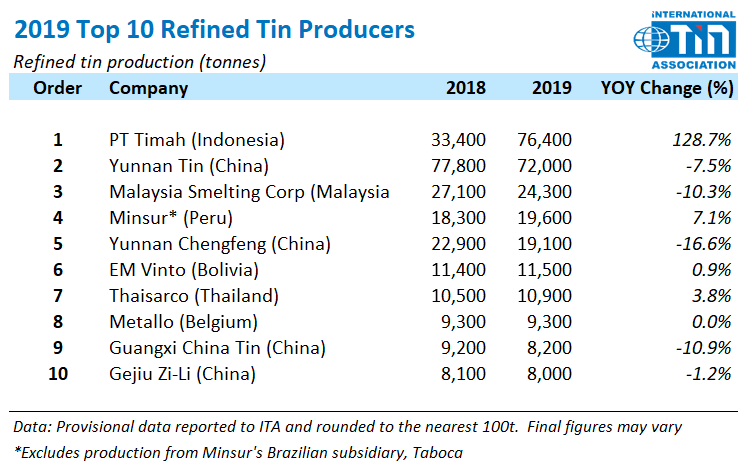 The International Tin Association compiles data on the world’s refined tin producers, presented annually. In 2019, we found that some 334,400 tonnes of refined tin was produced, down 6.6% on 2018. Just ten major smelters produced over 75% of this material. The group produced 14% more refined tin last year than in 2018 due to the significant increase in PT Timah’s production.
The Indonesian government-owned smelter doubled production after the enforcement of export regulations reduced competition for concentrate. Many of the country’s private smelters closed or reduced operations following the changes.
In China, smelters enforced the announced production cuts; refined tin production in the country fell nearly 11%. Production at Yunnan Tin – now the world’s second largest tin producer – declined by over 7%. Yunnan Chengfeng (5th) and Guangxi China Tin (9th) reduced output by nearly 17% and 11%, respectively.
South American production increased in 2019 due to increases at Minsur’s Peruvian operations and EM Vinto. According to Minsur, higher mine grades and increased recoveries at its Peruvian Pisco smelter saw the company raise output.
In Europe, output from Metallo was stable, while production in the region as a whole increased 2%. Metallo is still waiting for the output of the EU probe into its merger with copper recycler Aurubis.