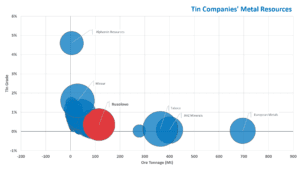 Rusolovo (red) now has the fourth highest tin resource when measured as a combination of companies’ individual projects and mines.

JSC Rusolovo, the tin-producing subsidiary of Russian metal producer Seligdar, has announced that it acquired the Pyrkakay stockwork deposit in eastern Russia on 11 August 2020. The new deposit is one of the largest in Russia.

According to the company, Pyrkakay has a resource which contains over 240,000 tonnes of tin metal. The acquisition of Pyrkakay now means that Rusolovo are the fourth largest company in the world when measured by their contained tin resource.

The company’s existing deposits contained a combined 167,000 tonnes of contained tin, but this has now increased to 410,000 tonnes through Pyrkakay. According to company reports, PT Timah holds the world’s largest tin resources (over 1 Mt of contained tin), while Minsur and Taboca (Minsur’s subsidiary) have the next two largest resources. In the chart (right), PT Timah are not included as no information is known about their tin grades or ore tonnages.

In 2019, Rusolovo produced some 2,300 tonnes of tin-in-concentrate from its Pravourmiyskoye and Festivalnoye deposits. This was a 48% annual increase, the result of a switch to continuous mining activities, rather than seasonal. In an independent 2019 report, it was thought that the Pravourmiyskoye deposit could be developed to support a processing plant with an annual capacity of 600,000 tonnes. This would be almost triple the size of the current mine’s production and would be a significant increase to tin metal production.